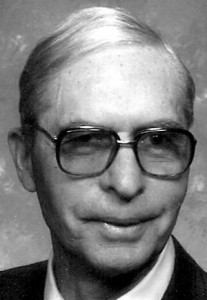 He was born June 6, 1917, in Cowley, the oldest child of Elmer Smith and Angie Hope Ballard Eyre. He married Ruth Odette Klingler Sept. 3, 1947, in the Idaho Falls Temple of the Church of Jesus Christ of Latter-day Saints.

He was educated in the Cowley schools and attended Brigham Young University for two years, where he enjoyed music with the Glee Club and the BYU choir.

As a youth he also enjoyed the Scouting program and the friends and experiences he had. He particularly enjoyed the National Jamboree held at Independence Rock near Casper.

He was called to serve an LDS mission to South Africa in 1939 and served a year there. Then, because of World War II, he was transferred to the Central States Mission where he served in Arkansas and Missouri.

In 1944 he enlisted in the Navy but was shifted to the Infantry and stationed in the Philippine Islands. He was injured and after recovering he continued serving as an assistant to General Eichelberger in the 8th Army Headquarters in Yokohama Japan. He was awarded the Purple Heart, the Asiatic Pacific Campaign Medal, and Philippine Liberation Medal with Bronze Star, World War II Victory Medal and the Army of Occupation Medal and was honorably discharged in 1946.

Carlyle was an excellent farmer and raised sugar beets, crops for the canning factory, corn, hay and grain for his cattle. He also grew a fantastic garden.

He was a faithful member of the LDS Church and served in many positions including teaching, Branch President, bishop of the Cowley 2nd Ward, High Councilman and stake missionary.

He was a good, generous man who silently gave his time and means to help many through the years. He also had a beautiful voice and brought joy to many with his singing.

He was preceded in death by his wife, Ruth; daughters Julia and Kathryn; brothers Ned, Smith, William (Billie) and Rex and sisters Velma and Dorothy.

Services will be held Saturday, July 2, at 10 am at the Cowley Ward LDS Chapel. Friends may call Friday evening between 6 and 8 p.m. at Haskell Funeral Home, 605 East Main, Lovell, and Saturday at the church one hour prior to the services. Condolences may also be conveyed at www.haskellfuneralhome.com.