U.S. 14 remains closed about 31.5 miles east of Greybull as a detour is being built around a slide. The detour is scheduled to open to through traffic by Friday, weather permitting, according to Cody Beers of the Wyoming department of Transportation. The constructed detour will handle two lanes of traffic and is scheduled to be paved today (Thursday).

WyDOT officials and contractor Wilson Brothers Construction of Cowley are hopeful U.S. 14 will reopen to through traffic by Friday, July 1 — 10 days after the emergency road repairs started. 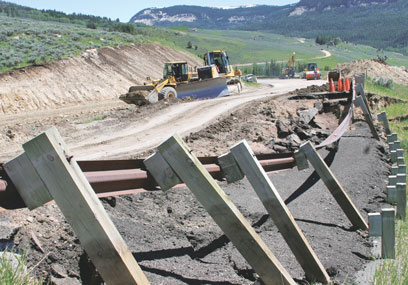 The Wyoming Department of Transportation gave verbal approval Wednesday, June 22, to a $164,877 bid to allow Wilson Brothers Construction of Cowley to begin constructing the detour.

The contractor had worked seven straight days as of Tuesday, June 28.

WYDOT is also monitoring other highway cracks for movement between the slide area and Shell which have emerged this month due to the heavy saturated soils and the heavy snowpack.

“We are concerned about several other areas, including significant cracking and movement at milepost 29, 2 1/2 miles down the mountain from the current slide,” Carlson said.

Movement of the 100-foot section of highway above Shell Falls — 31.5 miles east of Greybull — was first discovered Friday, June 10. The highway has remained closed on each side of the sliding highway since Monday, June 13. Recreational traffic is permitted to travel to milepost 31.5 at Ranger Creek on the west side of the mountain, while recreational traffic coming from the east side of the mountains is permitted to travel up to milepost 33, two miles south of Antelope Butte Ski Area, according to WyDOT.

While U.S. 14 remains closed, alternate routes over the Big Horn Mountains are available.  For large, heavy vehicles, such as commercial trucks, tour buses and recreational vehicles, WyDOT advises drivers to be aware that navigating the long, steep grades and winding corners of U.S. 14A can be difficult.