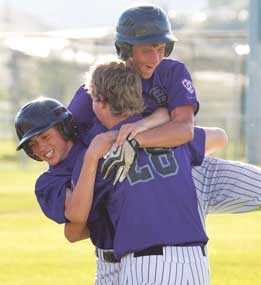 The North Big Horn Babe Ruth All-Stars made the short trip to Cody for the 13-15-year-old District IV Tournament Friday and Saturday, winning one of three games.

Manager Ray Peterson said the all-stars played well at times, though they tended to get off to slow starts and then battle back.

In the first game Friday, host Cody stopped the local stars 13-3. Starting pitcher CJ Murphey did a credible job on the mound for North Big Horn, but he received little offensive support as NBH didn’t score in the first four innings.

“We just started slow in that game,” manager Ray Peterson said. “We had the four innings without any runs, and we had a lot of strikeouts.”

Meanwhile, Cody plated two runs in the first and two more in the third to lead 4-0, then exploded for five runs in the fourth as Murphey gave way to Bill Despain.

North Big Horn came from behind in the next game to edge Greybull 14-13 and stay alive in the tournament.

North Big Horn took a 3-0 lead in the top of the first when Despain singled home a pair of runs and a third crossed the plate off the bat of Alex Connour. Greybull, however, got to North Big Horn starter Connour for four runs in the top of the second and four more in the third to lead 8-3 before NBH mounted its comeback, though Greybull kept scoring – one run in each the fourth, fifth and sixth and two in the seventh.

“Greybull came to play,” Peterson said. “They scored in every inning except the first. But our kids fought back, didn’t give up and had good fifth and sixth innings.”

North Big Horn scored three runs in the bottom of the third to trail 8-6 as Despain, Connour and Demitrie Montuy drove in runs, but Greybull built the lead to 10-6 before NBH responded with four in the bottom of the fifth to tie the score. Aaron Monterde had an RBI double during the uprising.

Caleb Horrocks led off the inning with a walk, then stole his way to third. With one out Connour lofted a fly ball to center field. Horrocks tagged up and came in with the winning run.

Asked about his team’s offensive turnaround, Peterson noted, “The kids started catching on that they could steal on their catcher and they started becoming more aggressive on the bases.”

Horrocks not only scored the winning run, he was the winning pitcher, throwing in relief of Connour.

North Big Horn met Powell in a loser-out game Saturday morning and fell 22-7. Powell scored four runs in the first off Lovell starter Mysen McArthur, then exploded for 11 in the second to lead 15-0.

“Mysen did a good job, but we must have had a dozen errors,” Peterson said, “bobbled balls, not making plays. Everybody started getting down on themselves.”

North Big Horn scored two runs in the second, four in the third and one in the fifth. Despain had a two-run single in the third.