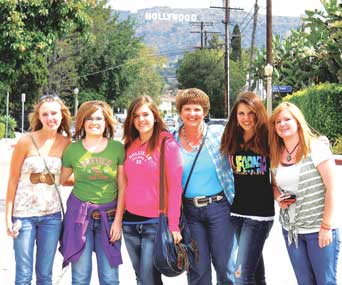 Five members of the Lovell High School chapter of Family, Career and Community Leaders of America (FCCLA) and their advisor Alana Thackeray traveled to a leadership conference that took place in Anaheim, Calif. July 10-14.

All five students qualified to attend after winning either a gold or silver medal at the Wyoming State FCCLA conference earlier this year. Students Melissa Ellis, Krystina Croft, Lauren Stewart, Tessa Watson, and Mesa Matthews presented their projects to a national team of judges at the conference.

Chapter president Melissa Ellis presented her project called “Pack it,” a fundraiser for breast cancer research, and won a silver medal. The project took a gold medal at the state level.

Student Krystina Croft won a national gold medal and a state silver medal for her project called “Look Who’s Talking.” As part of her project Croft made speech cards for children with speech impediments.

Lauren Stewart won two silver medals, one at the state level and one at the national level, for her project, “How to Calm a Crying Baby.”

Tessa Watson, FCCLA chapter vice president, won a gold medal in both the state and national level competitions for her project on bullying.

Mesa Matthews won a bronze medal at nationals and a gold medal at state for her archeology project.

While in southern California the students took a twilight tour of Disneyland, saw the play “Les Miserables” at the Ahmanson Theatre, visited Knotts Berry Farm and spent a day at the ocean at Huntington Beach, where they learned to ride boogie boards.

The students raised money to help pay for part of their trip by selling homemade suckers at basketball games during the school year.

The FCCLA is a nonprofit national career and technical student organization for young men and women in Family and Consumer Sciences education in public and private school through grade 12.