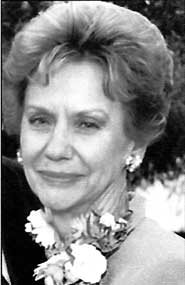 Marcy Ann Tebbs, 69, of Henderson, Nevada died July 7, 2011. She was born December 22, 1941, in Sioux City, Iowa, and was a 24 year resident of Nevada. Marcy was an accomplished pianist and active within the LDS Church. She was an extremely organized and strong-willed individual. She worked as an administrator for the U.S. Ski Team for 10 years, as well as an executive assistant for Fletcher and Ted Jones for 10 years. She also spent nine years with Card Player Cruises. She was a caring, loving wife and mother. She took on the additional responsibility of raising four other children above and beyond the seven of her own.

She was preceded in death by her parents, Al and Nell Heine and her son, Timothy Tebbs. Marcy is survived by her loving husband and best friend, Thomas M. Tebbs; children Teresa, Barbara, Tom, Pamela, Tyler and Dan; her nine grandchildren, and sisters Diane Pohl and Kathy Steele.

Memorial services were held at 2:00 p.m., Thursday, July 14, at the LDS Chapel in Henderson, Nevada.

“Death is no more than passing from one room to another.” Helen Keller.