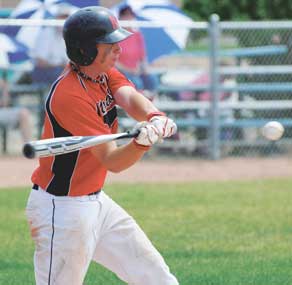 It was a great way to finish the regular season. The Lovell Mustangs American Legion baseball team wrapped up the regular season Monday afternoon with a doubleheader sweep over the Sheridan Jets, 9-8 and 10-8.

The wins were sorely needed for a team that had crammed six games into the previous five days, all of them losses.

In the first game Monday, manager Ray Peterson told his young team that they should be able to compete well against the Jets, the junior varsity squad of the Class AA Sheridan Troopers, because they would be facing players their own age — 16- and 17-year-olds. Indeed, the Mustangs played with confidence as they scored a lot of runs and made key plays on defense.

With the team having a lot of tired arms, the Mustangs turned to Dino Collins, normally the starting catcher, on the mound, and Collins did a good job, allowing four runs in five innings. 15-year-old Brandon Dickson pitched the final two innings.

Lovell took an early lead with two runs in the first and two more in the second to lead 4-1. Dillon Pickett hit an RBI double in the first inning, and Collins singled home a run in the second, followed by a double by Pickett.

Sheridan plated one run in the third and two in the fourth to tie the score 4-4, but Lovell responded with two in the bottom of the fourth to lead 6-4. Collins singled home Jake Adey with one of the runs.

Staying hot on a hot afternoon, the Mustangs scored three more runs in the fifth to lead 9-4. Back-to-back triples by Kyle Peterson and Adey, followed by a sacrifice fly off the bat of Dillon Pickett plated two runs, and Steven Pickett singled home Collins, who had been hit by a pitch.

The Mustangs relieved Collins with young Dickson in the top of the sixth, and the Jets scored four runs, but in a pressure-packed seventh, Dickson retired the side in order to preserve the victory and record the save.

“We’ve played a lot of baseball over the last two weeks,” Peterson noted. “Our defense is getting more sure, our pitching arms are getting stronger and our hitting is improved. Our batting eyes are better.”

In game two, Sheridan built a 7-1 lead after 2½ innings that the Mustangs cut to 7-4 with three in the third as Collins, Dillon Pickett and McKayan May crossed the plate. Sheridan went up 8-4 in the top of the forth, but Dillon Pickett relieved starter Hunter Hinckley and blanked the Jets over the last three innings.

Lovell rallied for two in the fourth, three in the fifth and one in the sixth. May had a two-run double in the fifth.

The Mustangs competed in the Billings Halos Fellowship of Christian Athletes State Invitational Wednesday through Friday.

In game one Wednesday afternoon, the Mustangs fell to the Billings Cardinals 14-3. The game was close early as Hinckley shut out the Cards over the first two innings. But as the Billings squad started seeing Hinckley for the second time they began to hit him and scored eight runs in the third, three in the fourth and three in the fifth.

The Mustangs didn’t score until the fourth, when they plated two runs, then added a run in the fifth when Dillon Pickett reached on an error and scored on a single by Hinckley.

Hinckley went the distance on the mound.

“We got off to a slow start. I don’t know how to get this team jazzed up, but it might be because it’s a young team,” Peterson said. “They were hitting the gaps and we weren’t.”

Playing back-to-back games, the Mustangs then met the Halos and played well against the strong team thanks to strong pitching by starter Steven Pickett, falling 3-0.

“Steven pitched a good game,” Peterson said. “He has good speed and a good breaking ball, and he hits the corners.”

Lovell got on base against the Halos, banging out seven hits, but the Mustangs stranded nine runners. Pickett blanked the Halos in five of six innings, allowing only a three-run fourth.

The Mustangs played a conference game against Cody Thursday afternoon as part of the FCA tournament, falling 8-3 in a makeup game from a June 7 rainout.

Peterson said it was a “tough one to lose” as the Mustangs were competitive but couldn’t get over the top. Hurler Dylan Hultgren was tough on the mound for the Mustangs, allowing only three runs in the first four innings, then five in the fifth before blanking the Cubs in the sixth. But the Mustang bats were cold until the seventh inning, when they scored three runs on consecutive hits by May, Nathan Ballard, Steven Pickett (RBI double), Adey, Hultgren and Kyle Peterson.

Rain shortened the tournament, and the Mustangs played a final game on Friday, falling to Livingston 9-3. Starting pitcher Ballard shut out the Montana team in the first and third, but allowed four in the second, one each in the fourth and fifth and two in the sixth before Dillon Pickett came on in relief.

Again, the Mustang bats were silent for six out of seven innings. They scored all three runs in the sixth on hits by Ballard (double), Hultgren (double following a walk to Steven Pickett) and Peterson.

The bone tired Mustangs had to travel to Powell Sunday evening for a pair of make-up conference games. Only nine players could make the trip, and Powell swept the Mustangs 11-1 and 19-0. Steven Pickett was solid on the mound in the first game, blanking the Pioneers in the first and second innings, but the good-hitting home team hit Pickett when they saw him again, ripping a pair of two-run homers in the third and adding three runs in the fourth, three in the fifth and one in the sixth.

Lovell scored its lone run in the fifth when Cody King doubled and scored.

Game two was all Powell as the Pioneers got to Hultgren for four runs in the first inning, 12 in the second and three in the third before the game was mercifully called. Kyle Peterson had the only hit for the Mustangs.

Now 8-25, the Mustangs are the fourth seed from the Northwest heading into the North District American Legion Tournament in Gillette Thursday.

“The kids have stuck with it, and they’re improved,” Peterson said. “Every player will be back next year.”

The Senior League baseball teams will sponsor the Cowley Pioneer Day barbecue lunch in the park Saturday at noon. Peterson said he would appreciate it if parents of Babe Ruth and American Legion players would help serve the meal on Saturday.