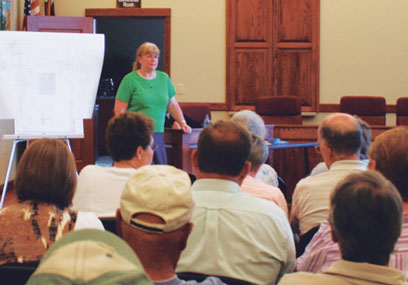 Emotional comments mixed with financial reality, and more questions and concerns than answers, were among the ingredients of a Byron Town Hall meeting Tuesday called to receive public input for a recipe on whether the town should assume ownership of the former Byron school.

Attendees stated varying opinions and perspectives during the informal gathering. At the conclusion, a consensus emerged that another meeting for public input, hopefully with greater attendance, is necessary, and that a referendum on what the town should do will be put to a ballot, mostly likely in August, according to Mayor Bret George.

Approximately 28 of 593 residents from the town’s 205 households attended the 90-minute public assembly on Tuesday evening, July 5. At issue is whether the town should accept a deed from Big Horn County School District One and thus incur various financial liabilities in connection with the facility. It, other than the former auto shop, could be deeded to the town by the district.

Other than ownership, the community questions involve whether Byron would maintain operation of the former school, “mothball” it or demolish it wholly or in part. Each option has costs, which were outlined by the mayor.

At one point, Charles Hessenthaler said that he would pay for “blowing out” the school water system so that the expense would not be realized by the town. He and others noted that by so doing, the facility would be mothballed for the winter, and that ground maintenance of $11,400 estimated by George would be in place anyway, should the town keep the site intact.

Demolition is estimated at $1.25 million, which the Wyoming School Facilities Commission would cover, but whether the town is in favor of that action is unclear. BHCSD1 is under a deadline from the SFC and does not want to pay for winterizing the buildings. It also does not want to jeopardize the funding for destroying the facility. The district trustees have voted in favor of holding off as long as possible but need a decision from Byron no later than Nov. 1. As Sue Taylor of Lovell Inc. observed, “the sooner the better.” She has worked extensively with the town council and its facility committee.

BHCSD1 needs to get the site off its books, and its deadline is coupled to one from the SFC regarding removal of some asbestos. There are differing techniques depending on whether the buildings will be retained or torn down.

A major question is whether the site of an estimated six to seven acres with around 95,000 square feet of building, including a swimming pool, cafeteria and classrooms, could be turned into a money-maker for the town through renting space to businesses.

“There are no guarantees,” Taylor said.

George opened the meeting with a brief history of the situation. He stated that the Wyoming SFC advised last week that it has denied a town request to delay any decision on the abandoned school until Nov. 1.

“We were trying to buy time,” said the mayor. He then turned the meeting over to Taylor, who moderated the session. She outlined several grants that seemingly are now out of reach because of factors including deadlines.

Regarding the forthcoming referendum on what the residents want, it would ask the town’s voters whether they approve of becoming the owner of record of the former school. Apparently the town could surrender the deed, but once the site is officially accepted, the school district would not take back ownership. Residents also will be asked to vote on assuming varied liabilities including maintenance. A list of “clearly explained” options would be on the ballot, with precise costs.

Assessments could be part of the plan, too. George added that the process for a referendum ballot through the Big Horn County Clerk’s Office will be undertaken at once, and that the cost of the election is estimated at $2,000. That matter and whether to bring in three engineers with expertise in structural, electrical and mechanical aspects are to be included on the agenda for the town council meeting on Tuesday, July 12, with a work sesson at 6 p.m., and the regular meeting at 7, said the mayor.

George told the assembly that CTP Engineers of Billings has offered a day’s worth of consultation at a cost of $2,500. Three en

gineers would offer their expertise on where some seams between portions of the building should be cut if partial demolition is decided upon.

Although some thought that a hard-and-fast decision about the facility would be made on the 5th, others in the audience said that more time is needed to examine the situation, although Taylor noted that the matter has been viewed and studied for the past three years. She said that the town might consider “turning a new page” by just letting the former school be totally demolished. The town could own the land, and it could be subdivided for residential and commercial lot development, Taylor said.

Some said that the site would be an eyesore, whether buildings remain or not, and there is concern about vandalism and liability.

As well, the economy seemingly is not conducive for what some in the town see as a good technique for economic development. Taylor and others cited some examples where industrial parks have not proven successful. Or in the cases of Chugwater and Worland, there have been stumbling blocks and the need for special taxes or assessments to maintain such sites.

Norma Perkins spoke passionately against demolishing the facility, stating that “it would be a crime to destroy that beautiful building.” She feels that the structure could be turned into a residential site for senior citizens, as it has a swimming pool and cafeteria. George said that he also had thought of that option.

Councilman Marie McCollam and George made heartfelt comments. Said McCollam, “This is not a decision for the four of us (the town council) to make; it must be a decision made by the whole community as it will affect everyone.” The mayor added that he does not want to saddle town leaders down the road, as well as the populace, with extraordinary costs. “I have huge concerns about encumbering future administrations with costs” that the town cannot afford, he said. And the town, he noted, “is the people,” who would bear the financial burden.

Pam Mooney said that “demolition is best” because the buildings are “in sad shape.” There would be significant costs to bring them up to code, she stated. “This is a small community; we don’t even know if we’ll continue to have a post office.”

Karma Sanders urged the group to “be careful criticizing the town council pre- or post-” because its members have worked hard and are seeking public input with the best interests of the community in mind.

Joyce Zarate and others expressed concerns about the possibility of increased costs to the town, which would be borne by its residents. “Am I going to lose my home?” she asked.

Although some businesses have approached the town regarding renting or leasing part of the facility, “nothing has panned out,” said Taylor. “There are no bad guys” in the matter, she said. It simply involves “a series of events that didn’t work out.” She added that, “It all comes down to money.”

And the mayor stated he knows that “there are more opinions out there” (in the community) as to what steps to take.