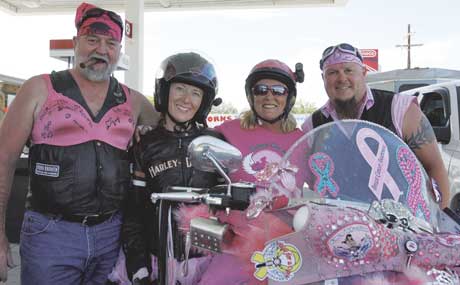 A group of motorcyclists dressed in pink on motorcycles decorated in pink attracted quite a bit of attention when they passed through North Big Horn County last week. The group is part of Women Who Ride (WWR) Conga Line, a motorcycle group created to raise awareness and money for breast cancer research. The group, which consisted of mostly females and a few males, was spotted in Cowley and Lovell. Members of the group en route from all over the U.S. and Canada passed through the area on their way to a special three-day rally in Shell that took place July 14-17. According to event organizer Flo Fuhr, the group hopes to raise $50,000 for breast cancer research this year.

Fuhr came up with the conga idea in 2008 when she bought a motorcycle from a company in Florida and had to drive it back to her home in Canada. A novice cyclist at the time, Fuhr was concerned about the long ride home with her new motorcycle so she contacted her internet friends to ride along with her. Numerous female motorcyclists escorted her over 6,000 miles until she reached home safely, in her words, “dancing me home safely like the conga dance.”

In 2009, Fuhr’s husband also bought a bike from the same firm in Florida and an even larger group of conga riders escorted him home on his new motorcycle.

Fuhr decided to use the conga ride idea to create a fundraising event for breast cancer research because it directly affects the women who participate. The all-female group of motorcyclists dressed up in pink, decorated their bikes in pink and hit the road to raise awareness and money for breast cancer research. The first year, they raised $12,000.

In 2010, the same women were joined by many more women and even a few men for a conga ride to Cheyenne. During that year the women raised $36,600. According to Fuhr, the group asks for donations and charges people to take pictures of them during their ride. All of the proceeds from the event are donated to the American Cancer Society for breast cancer research.