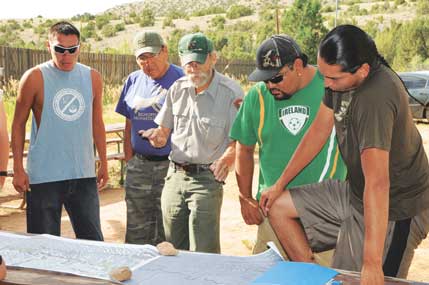 Helping members of the Crow and Northern Cheyenne tribes of southern Montana preserve their cultural history is the goal of an archaeological field school being held this summer in the Bighorn Canyon National Recreation Area.

Directed by Judson Finley of the University of Memphis, with the assistance of his father, Bighorn Canyon NRA archaeologist Chris Finley, the six-week course is into its third 10-day session this week, based out of the Ewing-Snell Ranch southwest of Barry’s Landing.

The goal of the course, according to Crow Tribe Cultural Resources Director Hubert B. Two Leggins, is to train five Crow and five Northern Cheyenne to become Tribal Historical Preservation Office (THPO) monitors to protect cultural resources on the reservations.

The training will help the monitors identify historical and cultural sites and understand what to look for, Two Leggins said, including surveying and mapping of campsites, identifying artifacts and more. The field school includes a strong course of reading material, he said, plus the field work.

Two Leggins said he appreciates the direction and assistance provided by the Finleys, as well as Kelly Branam of St. Cloud State University.

“They’ve held camps here for quite some time,” he said. “I’ve been involved for the last five years, and we were able this summer to get the THPO training. We’ll learn using GPS and today’s technology, and we’ll excavate for the next 10 days. We’ll have enough training to receive certification from Northwest College and college credit.”

Two Leggins and Chris Finley said there were seven Crow and two Northern Cheyenne completing the course, noting that the current focus is on college age tribal members and older, whereas past field schools focused on younger students.

Finley said the field school didn’t receive STEM (Science, Technology, Engineering and Math) funding this year, “but we wanted to go to the next step anyway,” he said, pointing out that with the THPO certification field school graduates will be able to work for private contractors and use their training to enter the job market, not just monitor tribal lands.

“A lot of contractors are under pressure to use diversity programs and hire a diverse group of students,” Finley said. “This training enables them to hire native American students trained to perform the duties of a regular crew member, not just as a monitor/observer. This gives them the credentials for the open job market.”

The first 10 days of the school focused on classroom work, from how to identify cultural material to understanding federal laws protecting cultural resources, as Finley put it, “Why we do the things we do” and filling out necessary paperwork.

The second 10-day session focused on starting to apply the training received in the classroom, with students going into the field to survey and identify cultural resources, learn mapping and familiarize themselves with documentation and site forms.

One of the interesting, but sometimes frustrating, things about Bighorn Canyon, Finley said, is that archaeologists must work with two state governments with two bureaucracies and two sets of forms.

“It really gets complicated when a site is on both sides of the state line,” Finley said with a smile. “This happens.”

The third 10-day session involves tours and training at a number of sites in the Bighorn Canyon area – “training their eyes to see the things on the ground that I see,” Finley noted, adding, “Big Horn Canyon is a remarkable place with such a variety of sites and occupation that is over 10,000 years. Everything you can imagine is here – like bison drive lines and associated jumps, and snow trap lines, where they drove the bison into large drifts.

“There are associated campsites, and the Bad Pass Trail. People traveled on it between the northern plains and the mountain foothills of Wyoming and Utah.”

“They’re really into it,” Two Leggins said of the students. “If they weren’t, they wouldn’t be here. It’s like their second home now.”

While the field school teaches members of the tribe important skills and builds relationships between the Park Service and the tribes, there is also a practical benefit, Finley said: getting some needed inventory work done on the recreation area.

“Instead of hiring a contractor we can incorporate the field school and train tribal members at the same time, so it serves two purposes,” he said. “We put a plan together to satisfy the wishes of the tribes, and we found a way to do the inventory but also work with the tribes and get the product they wanted. We’ve cleared 1,400 acres this summer. That’s a good inventory.

“We’ve been surveying stone circles along the Bad Pass Trail for seven years, and we wanted to see what happened further away from the trail. We’re getting a model of what happened in the area and have expanded our overall knowledge of what happened there throughout history.