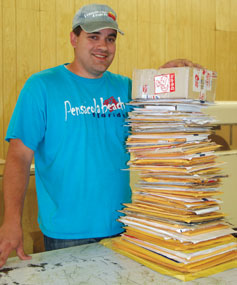 “You can’t judge a film by its cover,” said Jason Zeller creator of the Hyart Film Festival. He should know, after viewing around 300 films to make his final selection of the 64 films that will be shown at the festival this weekend at the Hyart Theatre in Lovell.

“I’ve seen some very nice looking packages where the film didn’t hold a candle to the package itself,” said Zeller, referring to the printed package some directors submit their films in.

Zeller notes that sometimes the first part of a film opening can be of a completely different caliber than the rest of the film.

“Sometimes the intro credits are so well done, they really get your hopes up,” explained Zeller. “Sometimes they (the directors) will put a lot into the credits but not into the film itself.” This is why Zeller and his selection committee viewed each and every film from start to finish before making their final picks.

Last year, one of the most popular films at the festival arrived in Zeller’s mailbox in a simple, no-frills cardboard sleeve. The film went on to win more than 40 film festival awards.

The Hyart Film Festival committee will present the 64 short films they selected to the public at showings in “blocks” over a three-day period August 11-13, starting at 7 p.m. on Thursday and continuing on Friday at 7 p.m. with horror films starting at 9:30 p.m. Particularly kid friendly films will be shown on Saturday at 3 p.m. followed by a more general interest block that will be shown at 7 p.m. that evening. Most of the films are family-friendly, with the exception of the horror films that will be shown in a special block on Friday night.

Zeller decided to enhance the festival experience even more this year by adding an hour of what he calls “film school” at 5:30 p.m. on Saturday. At film school, movie buffs will be given a peak behind the scenes at how some of the films were made. This peak will include footage and a discussion of the process that went into making of some of the films. Zeller will also talk about the selection process using specific films as examples, and will review some film “basics” like camera setups, animation techniques and basic sound recording.

Highlights of the festival this year include a film directed by well-known actor Leonard Nimoy’s son Adam called “Tickets.” The festival will also show two films from students of the acclaimed New York Film Academy and two films in the black and white “film noir” genre.

One of the horror films, “An Evening with My Comatose Mother,” has already won six first-place awards at other film festivals since April. Several foreign films will be shown from England, Australia, South Korea, Canada, Russia and Africa. The film from Africa called “Knock, Knock Who’s Dead” comes from the Burundi Film Center, where budding filmmakers are allowed only one month to train and one day to shoot their film.

Attendees can purchase individual passes for certain blocks or a pass for all showings at the festival. For more information, contact Sue Taylor (307) 548-6707.