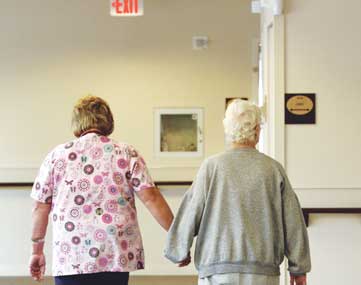 Participants young and old will walk again, for the ninth year in a row, to raise funds for the Alzheimer’s Organization. The Alzheimer’s Organization is part of a worldwide effort to find better ways to treat Alzheimer’s Disease, delay its onset and prevent it from developing in patients who are already afflicted with the disease. According to information on the organization’s website www.alz.org, there is no cure for the disease and there are no treatments available that can stop the worsening of the most common symptom of the disease, dementia.

Denise Andersen, director of the North Big Horn Senior Center, thought it “most appropriate” that the center sponsor the walk since seniors are a population most at risk for developing the disease.

“I thought this would be a good outreach for the center to increase awareness of the problem,” said Andersen. “Since most members of our center are at the age where the disease touches their lives in some way.”

The Memory Walk started in 1989 to raise funds for research and to find a cure for the disease. Since then, millions have walked to raise money for the Alzheimer’s Organization, which is dedicated to finding that cure. Andersen started the walk in Lovell after seeing a close friend decline from the disease.

Loretta Tippetts and members of her family have been participating in the walk every year since it started, and have donated as much as $600 in a given year. Typically, as many as 15 Tippetts family members will participate in the walk. Tippetts watched her own father slowly decline from the disease.

“Because of our dad, and how we had to watch him slowly become not the dad we knew, we wanted to help find a cure for this disease so that other people don‘t have to witness this,” explained Tippetts.

New Horizons Care Center at North Big Horn Hospital has a special wing in its care center for Alzheimer’s patients who suffer dementia as a result of their disease. Tippetts and others in the community have found it convenient to visit loved ones there and the center gives special priority to admitting patients who are from the community.

According to the hospital’s website, “The Alzheimer’s wing is one of the few facilities in the western United States designed, staffed and operated specifically for the care of people with Alzheimer’s Disease and related disorders. The center has 23 beds and a secure entry and exit for the protection of the elders who reside there. A highly trained staff of registered nurses, activity staff and other personnel work closely with patients suffering from dementia caused by Alzheimer’s and other diseases.

Lovell resident Evon May has watched her mother decline over time as a result of the disease. She finds it convenient to visit her mother at the special Alzheimer’s wing at New Horizons.

Her mother is close to 90 and is no longer able to care for herself after becoming forgetful about how to perform everyday tasks as a result of the disease.

May feels that the staff at the special hospital unit can keep better track of her mother than in a regular care center for the elderly since her mother, like many Alzheimer’s patients, is prone to “roaming behavior.”

May has seen her mother’s symptoms get progressively worse over the years.

“Sometimes she’s delightful and fun to visit and other times we can go up there (to the center) and she is so confused that she doesn’t even know who we are,” explained May. “A lot of times she will ask about Dad and he’s been gone since 2004. One time we visited and she thought she was at a party. We had fun. My husband danced with her on that day.”

Anderson plans to have an information table at this year’s Memory Walk for community members to learn more about the disease.

The event will take place on Sept. 17 from 8 to 10 a.m. at the North Big Horn Senior Center located at 757 Great Western Ave. in Lovell. Registration begins at 7 a.m. Participants can sign up any time during the walk.