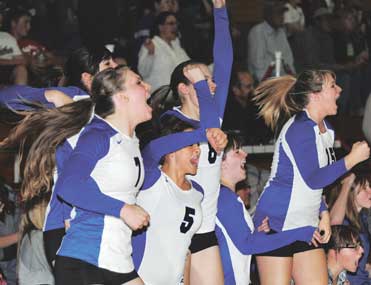 The Lady Bulldogs walked away with a first place trophy at the regional volleyball tournament this past weekend after pounding three teams, including their newly formed rival from Shoshoni.

The girls came in as the number one seed, which put them up against Kemmerer in their first match of the tournament. Kemmerer was the number four seed from the southwest and gave the girls a good warm-up and a confidence-building win. According to coach Stormy Jameson, the girls had the usual “first game jitters” but those feelings quickly dissipated as the girls took three easy wins in a row 25-11, 25-15 and 25-20.

According to Jameson, Wind River was a little bit better competition than Kemmerer, but she felt the LHS girls made more errors than usual, resulting in a closer score than she would have expected.

“I don’t remember making that many errors in the past few weeks, so that hurt us but we still won all three games,” said Jameson. “We had quite a few hitting errors this game and I think we could have handled them better without those errors.”

Walker had 10 kills, one ace, nine digs and two blocks. Ellis had six kills, one block and 35 digs. Robertson had 12 kills, 10 blocks and eight digs. Griffis had three kills and 11 digs. Reasch had five kills and seven blocks. McClure had 31 assists and 11 digs, Shyann Wilske had nine digs and Winterholler had 28 digs. Walker, Ellis, McClure and Robertson all served 100 percent.

“Chelsey (Ellis) had a really good defensive game, she even told me after the game that she wasn’t going to let the ball hit the floor if it came to her, no matter what,” said Jameson.

The girls faced off with Shoshoni in the championship game on Saturday afternoon. Shoshoni beat LHS twice this season and the girls were not about to let that happen again. They came in strong and pounded Shoshoni in three hard-hitting games 25-17, 25-16 and 25-18, giving the Lady Bulldogs that solid first-place finish at the regional tournament they hoped for.

“We really wanted our revenge on Shoshoni,” said Jameson. “We didn’t really care who we played either way, we just wanted to win, but when we heard it was Shoshoni we were pretty excited that we could get some revenge on them.”

“I reminded the girls in our pre-game meeting and pep talk to remember what it felt like to lose to Shoshoni,” said Jameson, “to remember how mad they were and how upset they were that they lost and not to let that happen again. I told them to do whatever they could not to let that happen again. I reminded them that we’ve seen them, we’ve played them several times throughout the year, and they should know what is needed to be done to beat them. I told them it will come down to who makes the fewest errors.”

The girls heard those fighting words and rose to the occasion.

“They listened to what I said, and that was one of the smartest games they played all season,” said Jameson. “We were good all-around in our blocking and our hitting. We played really smart the whole time with very minimal errors. It really made the difference. They were focused from the very first point to the very last point.”

“She (Walker) played very solid all the way around,” said Jameson.

Robertson had 13 kills, one ace, nine digs and six blocks.

“Erin played very hard and very aggressive,” said Jameson. “She also really stepped up in her leadership role during this game.”

Griffis had four kills, one block and five digs and served 100 percent.

“Miranda (Griffis) is the person you always want on the court,” said Jameson, “because she is so enthusiastic that she just brings the team up, which is not something you can see in the stats.”

“Shyann is a hustler who is not afraid to risk her body to get the ball,” said Jameson.

According to Jameson, the team is “excited” about this win but won’t be “satisfied” until they win the state title.

“I couldn’t be happier right now,” said Jameson. “We played a good tournament all the way around. When you look at our stats, you can see how everyone on the team contributed evenly. It wasn’t like just one person did all the work. We played the best team volleyball we’ve played all year long. I would say we’re peaking at the right time. You want to be playing the best volleyball you can at the end of the year, and right now that is what we’re doing.”

The team had quite a few fans turn out for the regional tournament, including some of the boys from the football team. Jameson thought it really helped the girls to have that support especially since Shoshoni had a lot of fans at the tournament.

The girls are looking forward to playing for the state title this weekend. The first game against Southeast begins at 7:30 p.m. on Thursday.

“I think if we play again like we did in that championship game against Shoshoni, we’ve got a shot at beating anybody,” said Jameson.