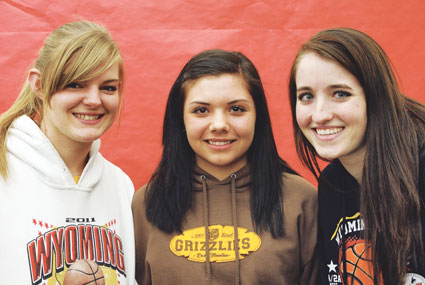 The project not only taught them how to make a film but also what it takes to run a business.

“We learned that it takes a lot more than just knowing how to run a business,” said Wilson. “There’s a lot of risk involved. It takes a lot of hard work.”

One thing that impressed all three girls was the amount of dedication the business owners they interviewed had to their businesses.

The girls were inspired by the business owners they interviewed, and reflected upon what it would take to run their own businesses.

“I’ve never thought about having my own business, but after this I feel like it could be an option in the future,” said Allred. “It’s definitely a lot of work, but it also sounded like it could be enjoyable.”

As the girls’ advisor, Mader was impressed that they chose such a challenging project.

“It was such a huge project for them to take on,” said Mader. “There must have been over 600 kids in Cheyenne for the competition.”

All three girls agreed that, if they did decide to start their own business, it would have to be doing something they love because of the enormous time commitment they learned that business owners have to make in order to run their businesses.

A total of 28 students from the Rocky Mountain High School FBLA Chapter participated in the event, which was held in Cheyenne last weekend.

The girls who won first place with their film qualified to take their project to the FBLA National competition in Texas this summer. The competition will be held June 29 through July 2. In the meantime, the girls are working on refining their film to make an even bigger impression on the judges and will be holding fundraisers to raise the money for their trip.

The mission of Future Business Leaders of America is to bring business and education together in a positive working relationship through innovative leadership and career development programs. More information about the organization can be found at http://www.fbla-pbl.org/.