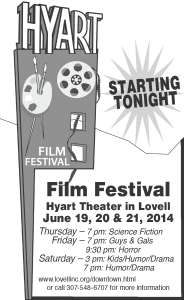 Give it a try. You won’t be disappointed.

That’s the message Hyart Film Festival organizers and supporters are presenting as the fifth annual festival gets under way at the Hyart Theatre in Lovell this week.

The festival runs Thursday through Saturday at the venerable theater in downtown Lovell.

“I’ve never been so excited about the lineup in terms of the enjoyability of the films,” Director Jason Zeller said this week. “I feel so strong about it that I almost feel like saying, ‘Show up and if you feel it was a waste of your time, I’ll give you a refund.’ I guarantee people will like it.

“We have more award-winning films this year than ever before,” he added, saying the festival is heavy on comedy this year with 25 comedies and 13 dramas.

There are five blocks of films during the festival, based on themes. The blocks include:

Tonight (Thursday) from 7-9 p.m. – Science Fiction, including the film “2020” made by 1998 Lovell High School graduate Ethan McDowell about post-nuclear war America in the year 2020 and “Game Companion” about video game characters who come to life.

Friday from 7-9 p.m. – Date Night films for guys and gals featuring alternating “chick flicks and guy flicks.” Zeller said the block features two of his favorite comedies in “Fart Rudy,” about a man with a certain problem who tries to alleviate his problem by working with the flatulence god, and “Pint” about a man at a wedding who “really has to go” after drinking lots of beer.

For gals, favorites are sure to be “Love at First Sight” about a man who tries to get a woman to notice him and “Avalon” about a woman who gets left at the altar.

Friday from 9:30 to 11 p.m. – Horror. Highlights include “”Playing with the Devil” about girls who are protected from an evil force but accidentally remove the protections one by one and “A Veces Viene” (translated “sometimes it comes”) about a woman waiting at home for her husband or boyfriend and realizing there’s something in the house, and it isn’t him.

“Both of these made me jump and raised the hair on the back of my neck,” Zeller said. He emphasized that the late Friday block is recommended for older audiences.

Saturday from 3 to 4:30 – Family Friendly Films. The block includes three of the four animations accepted by the festival as well as “Show and Tell” about a boy who tried to top the best show and tell he’s ever seen.

Saturday from 7-9 – A Mixed Bag of Treats. Highlights include “The Telegraph Man” about a man who delivers telegrams and must endure the emotional response from people when the news is bad and “Absaroka” by Cody filmmaker Patrick Mignano, which was filmed in the Big Horn Basin.

“Malpractice” from the Vancouver Film School is a humorous film similar to an episode of the TV comedy show “Scrubs,” Zeller said.

Zeller encourages people to attend as many blocks as they can.

“People who just show up Saturday night will wish they could have seen more of the film festival,” Zeller predicted. “People often say that.

Some fans of the film festival attend almost every year.

“I think it’s fun to see other people’s creativity. I do enjoy that,” said Lorilyn Beck of Lovell. “It’s fun to see what people come up with.

“I told someone at the college (NWC) about it who had never been there. I said these are shorts. If you don’t like one, there will be another one soon. If you do like one, you’d wonder if it will go on (and be made into a feature film). It’s interesting to learn about the whole movie-making process.”

Having examined the lineup for this year’s festival, Beck said she’s looking forward to the festival.

“I’m particularly excited this year. A lot of them have already won awards,” she said. “When you think about it, it really is a big deal in the movie world, even though we’re in a little town.

“I wish more people would come.”

“Some people may expect an a Academy Award film and they’re not,” he said. “But you have to start somewhere in a film career. What a great opportunity for filmmakers.

“If there’s one on there that you’re not enjoying, go get some popcorn and come back. I’ve not enjoyed every one I’ve seen.”

Dickson said he’s glad to have the festival in town.

“I just really appreciate Jason and his enthusiasm on this and his desire to make it an annual event in town,” Dickson said. “I think people will really enjoy it.”

Rex Myers of Powell and his wife Susan Richards have been to the last three years of the festival.

“We think it’s one of the most entertaining evenings of the year,” Myers said. “The selections are wonderful. That doesn’t mean we like all of them. This is the sort of thing you only get in the big city. It’s wonderfully broad and diverse, great entertainment.

“We’ve lived other places and have gone to theaters that do foreign films. Where can you see foreign films anywhere else in Wyoming or even Billings for that matter? And here they are.”

Myers, an adjunct professor at NWC, said he agrees with the “give it a try” mantra of this year’s festival.

“It’s entertaining and it’s just great to see all of the wonderful things people are doing with film out there. It’s not Hollywood — the standard, formulaic thing you get from Hollywood. People come back and say ‘Wow!’

“We even like to go in the spring and watch the ‘best-of-the-festival section.”