Contractors working on the Lovell Main Street Project this fall have been fortunate as the weather has stayed mostly favorable – until this week. 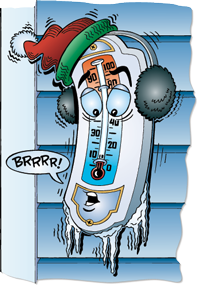 With final repair and patching work under way last week and scheduled to continue this week, Monday’s bitter turn in the weather has left the final stages of the project in limbo, at least for a few days.

A repair and patch program began last week in the two southern, eastbound lanes of traffic on Main Street, with two-way traffic diverted to the two northern, westbound lanes while Reiman Brothers crew members replaced concrete street panels that had cracked after being poured earlier in the project. That work was conducted from the east end of Main to Kansas Avenue in the two eastbound lanes.

According to Wyoming Dept. of Transportation Resident Engineer Ben Steed, the work almost got finished.

“We had to shut down early this week,” Steed said. “We’re going to open the eastbound lanes when we start working again.”

All that’s remaining in the eastbound lanes from Kansas east is fixing nicks in some of the panels where corners or joints have broken off, Steed said. That patching work uses a product called HD50, which “sets up really fast,” he said, but requires the temperature to be above freezing.

On Tuesday and Wednesday, temperatures remained in the teens or lower with a wind chill factor of below zero in the stiff breeze. According to the National Weather Service, temperatures are forecast to moderate later in the week but not creep above freezing until Monday.

“We need one more day (to complete the eastbound lanes),” Steed said. “Then we’ll swap traffic and do the westbound lanes.”

The goal, Steed said, is to finish the business district first and get it cleared, then move west of Kansas for the patch and repair work. Meanwhile, Main Street businesses are once again facing coned traffic control in front of their businesses, although customers are being allowed to steer between the cones and park along the curb in stretches where there are no poured concrete panels curing.

“We’re hoping it will get back into the 40s so we can pour concrete,” Steed said, but he said if wintery weather sets in for good, the wrap-up work may have to be postponed until next spring.

“We still have to tear out the old joint seals and redo that in the spring,” he said, “so if the weather stays cold we may have to do the repair work next spring, too.”