Momentum is building for the revived walking/biking path project for Lovell as another active meeting was held Thursday night at the Bighorn Canyon NRA Visitor Center auditorium.

Sixteen citizens attended October’s initial meeting, and more than 20 turned out for the second meeting Thursday.

“This is a great turnout,” organizer Christy Fleming said to kick off the latest get-together. “We’re all very interested in having a walking/biking path in town. Paths increase property values, make the community a more healthy place and bring more people to the area.”

Thursday’s meeting was designated for exploring prospective ideas of where citizens would like the path to go, but Fleming first answered some questions that came up at the first meeting. Noting that she was asked to look into walking path projects in other communities. 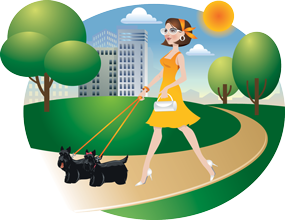 Buffalo has more than 20 miles of trails, with the mayor and council getting the project going in the 1990s, Fleming said, and the Bureau of Land Management donating land for a trail west of town toward the base of the Big Horn Mountains. The city takes care of major maintenance, she said, with sweeping, trash pickup and the like performed by a “trail board.” The town also does mowing and summer maintenance, Fleming said.

“I like that format,” she said, “working with the town but citizens helping to maintain it.”

Turning to financing, Fleming said she has some grant ideas. She said the deadline passed on Aug. 31 to submit an Outdoor Foundation Challenge Cost Share Grant, but she said the grant could be sought next year. She also noted a newspaper article about Yellowstone National Park using recycled tires for a walking path.

Attention then turned to possible routes for a Lovell path. She said Aubrey Walker couldn’t make the meeting but submitted an idea via email. Walker suggested a path around Constitution Park connecting with another loop around North Big Horn Hospital and the New Horizons Care Center.

LB Kummerfeld said concrete is hard on her knees, but Schneider noted that gravel is harder to maintain and she had no easy way to figure asphalt costs. Mayor Angel Montanez noted that the Town of Lovell will soon build new sidewalks up the Shoshone Avenue hill, and Schneider said the path could easily tie into the sidewalks.

Longtime walking path advocate Marilyn Haskell also suggested that a hospital loop tie in with the town sidewalk system on Shoshone and extend south the Lane 13, noting that walkers could park at the hospital/care center facility. She displayed a route with the path continuing west to Highway 32, then north to a dirt road running between fields that would make a loop back east to the Lovell school complex. She said different phases could be constructed, including a path to the Park Service visitor center.

“We must take into consideration places to park a car,” Haskell said, adding that the committee must decide the use of the pathway: walkers only, bicycle riders or motorized vehicles like a golf cart. The use would determine the width of the path, she said.

Haskell said a walking/bike path is “something the whole community needs for quality of life,” adding that a pathway system would “add to the niceness of Lovell.”

Jill Carpenter said she agrees with Aubrey Walker that a path around Constitution Park would be nice because parents could walk and watch their children play in the park.

“As a mom, I’d like a place I can exercise and still watch my kids,” she said, adding that a hospital loop could be a good start, with an opportunity to find funding through a long-term health grant.

Some mentioned McKinley Avenue as a way to reach the bench but worried about how narrow the road is where it climbs the hill. Greg Walker asked about widening the road or putting a path in off the road. He added that efforts should be concentrated at the hospital to link to Shoshone and at Constitution Park leading to the hospital, saying that building a path to the golf course could be “a lot of hassle.”

Fleming said some ideas will be finalized to bring to the next meeting on Dec. 17, and she hopes to include the Wyoming Dept. of Transportation, county commissioners and legislators.

A small subcommittee was formed to drive the possible routes on Tuesday, Nov. 24. The routes will be put on a large map to be presented at the December meeting.

Fleming said the group’s assignment for the next meeting is to “bring representatives from the town, county, state, companies, hospital, schools, Mustang Center, Foster Gulch…Any of the representatives that can help us make this happen.”