The movie “Woodlawn” is a 2015 American sports drama film being shown at the Hyart Theatre on Jan. 8 and 9. It is the true story of Tony Nathan, a gifted high school football player who learns to boldly embrace his talent and his faith, along with other black students at Woodlawn High School, which was desegregated by a government order in Birmingham, Ala., in 1973. 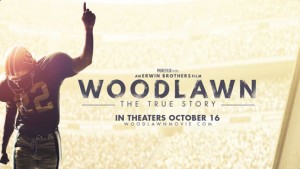 Cross burnings and riots erupt in the city while Tandy Gerelds, the Woodlawn Colonels football coach, struggles to ease the racial tensions between his players. When Gerelds allows Hank, an outsider, to speak to his team, real change begins. The message of hope and love Hank shares with the team convinces the players that there is a “better way” through following Jesus.

The team, both black and white, discover that the spiritual change they experience has a profound effect on the coach, the school and the community as love and unity overcome hate and division.