It was standing room only at a joint meeting of the Yellowtail Dam/Bighorn Lake Operations and Bighorn River System Issues Group held in Lovell on Thursday, April 14, at the Lovell Community Center. Speakers from various government agencies including the Bureau of Reclamation (BOR), the Natural Resources Conservation Service (NRCS), the National Park Service (NPR) and the Crow Tribe provided a recap and outlook of reservoir operations, an update on the status of ongoing activities and a review of current operating criteria for dam operations. Members of Friends of Big Horn Lake attended with local interests in mind, along with a handful of local citizens.

Lucus Zukiewics from the NRCS office in Bozeman reported via teleconference on snowpack conditions that affect dam operations. He reported that El Nino conditions have kept temperatures about 10 percent above average and that precipitation for March ran about average or above average.

Mahonri Williams of BOR reported that the Boysen and Buffalo Bill Dam stream operations, which are upstream of the Yellowtail Dam operation, are running at average or a little above average and he said the resources are in good shape for now. He said the Wind River and Shoshone River are showing much better numbers than last year and that he thought storm conditions in March helped considerably. He said the three-month outlook anticipates above average temperatures and precipitation for all of Wyoming and Montana. 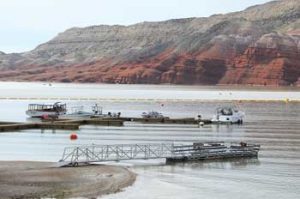 Jordan noted that though precipitation was below average from October through February, it was about average for March and is expected to be average or above average April through June.

He said the predictions are fairly good, but how much water is released really depends on what actually happens in the spring, in terms of precipitation. He said though we are seeing much below average snowpack in some areas, we are anticipating much above average precipitation. He said he expects the normal draw down of the lake to continue into the month of April and to begin to fill to full conditions through May and June.

“One thing we know for sure is that we won’t be right on in this probable forecast,” said Jordan. “That would be a feather in my cap if I could do that. Either we’ll get more in one of the months or less volume. For that reason, we’ll have to continue to evaluate and make adjustments as needed.”

Ryan Colloton of BOR reviewed a pilot study regarding reservoir sustainability, with particular regard to sedimentation. Big Horn Lake is part of the pilot study. The goal of the study is to find a way to control sedimentation in Horseshoe Bend. The study looked at three options: venting turbid density currents, altering the geometry of the upper portion of the reservoir to improve the passage of sediment downstream and dredging.

Colloton said the plan for the year 2016 is to review and collect data and to review plan options. In the year 2017, his team will work with stakeholders to plan potential long-term options and in 2018 to develop report and guidelines for options.

Friends of Big Horn Lake member Lynn Richardson expressed concern that the study is not looking at dealing with the sediment before it gets into the lake system. He said the study seemed a bit “backwards” from his point of view.

Some audience members wondered why the sediment wasn’t being offered to bentonite plants in the area, that would use the material in their reclamation operations. Gerald Benock, Manager for the Planning and Project Division, answered that the volume was “huge” and it would cost millions of dollars to move it to the plants, making it not a feasible option.

The next presenter was Clay Gregory, Cabinet Head for the Crow Tribe Water Resources Program. He updated the group on a number of projects connected with the Crow water settlement act of 2010, including the Crow irrigation project and the design and construction of a municipal, industrial and rural water system. He said the master plan for the irrigation project is complete and has been in the design and construction phase for about three years. He said the tribe has been developing a full-time construction crew to work on the project. He said the municipal water project is still in the planning stages.

NPS Superintendent John Bundy reported on Bighorn Canyon National Recreation Area operations. He said the log booms are now in at Horseshoe Bend and Barry’s Landing to help manage the driftwood in those areas. He said the log booms are not in very good shape, describing them as “worn out.” He said the park service expected to have to repair them and has already requested the funding to do so, but they won’t be replaced until 2017.

He said Kayak lessons will resume in July and there will be many interpretive programs offered as in past years. He said there is also funding to re-landscape the picnic area at Horseshoe Bend this year.

He noted that one of the highest priorities on the north end is to figure out the best way to repair the Afterbay launch ramp. He said the repair has not been separately funded, so the cost will have to come out of the Park’s base funding. He did not indicate what that cost would be but assured attendees it would somehow get done.

“We understand that this is a very popular area and it is of too high a public need for us to ignore it, so we’re going to try to get it done,” said Bundy.

He said funding is available to replace all the docks at the Ok-A-Beh Marina. He said the docks will be purchased and brought in and then put together in a nearby area during the season. He said when the old docks are removed at the end of the summer, they will be replaced with the new docks the following spring, noting there will be no disruption in service in terms of marina use at the north end.

One attendee inquired about the floating comfort station at Devil’s Canyon. Bundy said the floating station has deteriorated and will not be replaced this year because there is no funding to replace or repair it. Funding has been applied for and a response to the request is expected in September.

Another attendee inquired about placing buoys in the south end so that boaters can tie out while recreating in nearby areas. Bundy said that is something that is being looked into, but he didn’t say if those improvements would be seen in the near future.