Last Saturday, a deal was consummated whereby the Hendrie and Bolthoff Manufacturing Co. of Denver sold to C.S. Vaterlaus the right, title and franchise, and all wires, poles and crossarms, together with all machinery owned by them in Cowley. He expects to make a special effort to furnish current to the picture show and the ward hall, then to a few nearby places, as also a number of street lights. The capacity of the small generator is very limited and he is therefore not able to supply all who are wired to receive current.

The state highway department is making preparations for the erection of a $25,000 shop and maintenance building in Lovell. The new building will be located east of the armory on a part of what was the parade grounds on land which already belongs to the state. The shop building is expected to be about the size of the one located in Cody, and will have similar fencing and yard for the storage of highway equipment.

Pic: No ordinary rock, but believed to be a petrified turtle, this was found during street excavations on Montana Avenue during the recent paving project. It now occupies a niche in Jim Asay’s flower garden at 863 Montana. 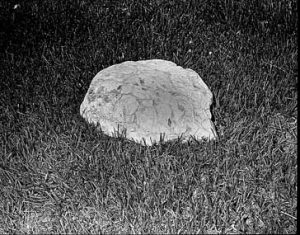 After 30 years of teaching, Pat Dixon has retired. Mrs. Dixon taught at the high school level in West Virginia for six years. The young Dixons, however, eventually longed to see something new. Attracted to the area and the great fishing possibilities, the Dixons moved west to Boulder, Colo. Mrs. Dixon spent another six years teaching there. They finally moved here 20 years ago. Since that time, Mrs. Dixon has been the sixth grade English and reading instructor.