Railroad brotherhood officials late Thursday agreed to accept, as a basis for calling off the strike, the Adamson compromise eight hour bill, already approved by President Wilson and House leaders. The measure was introduced immediately by Representative Adamson, with a view to having it passed and sent to the Senate. The Adamson bill would provide for an eight-hour day at the present ten-hour day pay. Employees would be given the pro rate for overtime. A commission of three, to be appointed by the President, would report to him and Congress in not less than six nor more than nine months, the effect of the eight-hour day. Expenses would be paid by a federal appropriation of $25,000.

Mary had one lamb; A soldier needs 26. Each enlisted man receives the equivalent of approximately 199 pounds of wool, as it comes from the sheep’s back. According to statistics compiled by the quartermaster corps it takes the wool output of ten sheep to provide the soldier with clothing in the beginning of his military service and six more to maintain proper clothing stocks. Another ten sheep are required to provide the wool for the maintenance of clothing issued to the soldier. These needs make the Army one of the largest consumers of wool products. 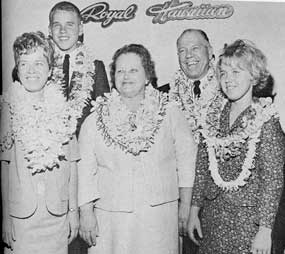 Francis E. Morrison of Lovell was elected president of the National Society of Public Accountants at their 21st annual convention in Honolulu, Hawaii, Aug. 25. Morrison said that delegates to the Hawaiian convention would return with new and valuable ideas for the clients they serve.

Pic: The Francis E. Morrison family of Lovell were guests at the Royal Hawaiian Hotel during the National Association of Public Accountants Convention. Left to right are Anne, Bruce, Mrs. Morrison, Francis Morrison and Susan. (Photo by Sheraton Hotels)

Kenneth Blackburn of Powell has been hired as the new north end Big Horn County Sheriff’s Deputy, Sheriff Gary Anders announced Wednesday. Anders said Blackburn, 28, has been employed with the Powell Police Department from 1987 until the present. He said prior to working with the Powell Police he was a seasonal employee with the Park Service in Lovell as a park ranger.