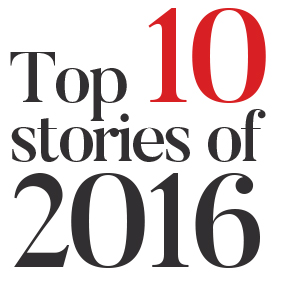 The topic of greatest interest in 2016, unquestionably, was the election. While it was a relatively quiet election for state and county offices, with most officials halfway through their four-year terms, the heated rhetoric of the national race for president dominated discussions in coffee shops and at dinner tables across the land, including here in Big Horn County. Big Horn County voters voted with their Wyoming brethren in heavily favoring Donald Trump for president as the Republican candidate vanquished Democratic candidate Hillary Clinton.

In other state and local races, voters approved Liz Cheney for the U.S. House of Representatives, Jamie Flitner for Wyoming House District 26, Deb Craft for Big Horn County Commissioner and, in contested town council races, Tom Newman and Carol Miller in Lovell and Allan Clark and Michelle Hoyt in Byron. Brett Crosby also survived a three-candidate challenge to win re-election to the School District No. 1 Board of Trustees.

Our third-ranked story was coverage of various milestones reached in 2016. In late June, the Western Sugar Cooperative celebrated 100 years of sugar production in Lovell with a special centennial barbecue and program at Constitution Park, commemorating the construction of the sugar factory in Lovell in 1916. Hundreds of current and former factory employees, growers, local officials and members of the general public gathered at the park in celebration of the sugar factory’s centennial.

Also in June, Queen Bee Gardens celebrated 40 years in the honey candy business with a barbecue luncheon next to their candy factory on Main Street, and in September St. John’s Lutheran Church celebrated its 100-year anniversary with a series of special events. In October, National Park Service employees marked the 50th anniversary of the Bighorn Canyon National Recreation Area with a pop-up museum at the Brandin’ Iron Restaurant in Lovell. Across the nation parks celebrated the centennial of the National Park Service.

Projects, both public and private, showed a continuing progressive attitude in North Big Horn County during 2016. Most notably, the North Big Horn Hospital District this fall completed a dazzling new clinic addition that has greatly expanded the clinic’s capacity for patient examinations, as well as physical and occupational therapy, plus an efficient and attractive lobby and check-in desk for the hospital and clinic.

The Town of Lovell is proceeding with a new water tower to enhance water pressure and fire suppression flow on the hill in Lovell. Easements were obtained for a new water line to the tower, and the project design was completed. At year’s end the project has gone out to bid, with construction set to begin in the spring.

The Town of Cowley received a $425,000 community enhancement grant from the State Loan and Investment Board in June for a planned addition to the historic Log Gym and Rasmussen Building.

Midway Auto Sales announced a new line of Kymco products, and Bazooka Lumber moved to the Oasis Junction. The Cowtown Restaurant opened once again in Cowley, then later closed, but at year’s end a new restaurant is being constructed in Deaver.

Fundraising is continuing for a new roof for the Hyart Theatre.

The economy and government belt-tightening made the news in a big way in 2016. The declining production of coal and low oil and gas prices put the pinch on Wyoming government in 2016 as the legislature slashed state department budgets during the February budget session and the ripple effect has been felt at the local government level. Cities and towns battled to hold onto their current level of direct local government financing even as the county consensus capital construction program was put on hold. Schools are facing a steep decline in project construction funds with the loss of coal lease bonus money, as well as probable cuts in general financing in the future. The Wyoming Dept. of Health was asked to make $90 million in cuts to its programs.

With the downturn in the oil and gas industry, Wyo-Ben, Inc., announced the planned closure of the Sage Creek bentonite plant in Lovell, and Big Horn County’s assessed valuation plummeted by 22 percent, reaching its lowest level in 10 years.

North Big Horn County residents showed their boundless heart and compassion once again in 2016 with numerous fundraisers to help children and their families facing serious medical conditions including Macey George and Jared Bates of Byron, Alexis Delacruz of Lovell and baby Charlie Petrich of Byron.

North Big Horn Hospital and the New Horizons Care Center garnered many honors and awards in 2016. The hospital was ranked number one in Wyoming in many areas of quality in a Centers for Medicare and Medicaid Service survey and later won the Wyoming Quality Achievement Award, and the care center received the Wyoming Recognition of Quality Excellence Award for 2016 and the Platinum Level Innovator Quality Achievement Award.

Hundreds of children and parents flocked to a special health and safety fair offered by North Big Horn Hospital in May, and in August Chief of Nursing Tina Toner won the Norman S. Holt Award for Nursing Excellence.

A committee continued work on a planned walking/bike path for the Lovell community, but unfortunately the efforts of another local committee were apparently for naught as the Town of Lovell declined to move forward with the Lovell recycling program.

Veterans were honored at a special Welcome Home Day program hosted by Gov. Matt Mead at the Lovell Community Center in May and at two Veterans Day ceremonies, one at the LHS Johnny Winterholler Gym and another at the North Big Horn Senior Citizens Center.

Local schools continued to excel in sports and activities. The Rocky Mountain wrestling team placed second at the 2A West Regional Tournament held in Cowley, then placed second at State with Brian Crawford and Wes Homewood taking home individual state titles at 106 pounds and heavyweight, respectively. Merrill Beck won the Class 3A 170-pound title for Lovell.

Both the Lovell girls and boys basketball teams advanced to the Class 3A State Tournament after strong play at Regionals in Afton, and the Lady Bulldogs won the consolation championship at State.

The Lovell dance team placed third in the hip-hop category at the state spirit competition in Casper, and 24 LHS students received blue ribbons plus three major awards at the Wyoming State Art Symposium.

The Rocky Mountain boys track team placed third at the state track meet in May, and the Lovell Mustangs placed fourth at the Class A State American Legion Baseball Tournament. Both finishes were the best in years for the track and baseball teams.