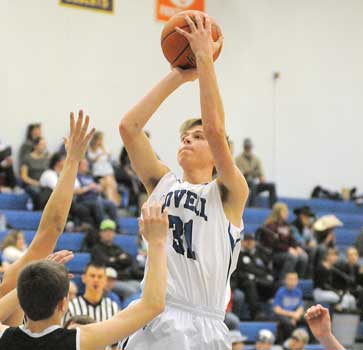 Chalk up another successful weekend for the Lovell Bulldogs. Playing two games at home for the first time this season, the Bulldogs blasted outmanned Riverside Rebels 62-14 Friday, then came from behind to defeat the Wyoming Indian Chiefs 60-52.

The Bulldogs have won seven in a row since falling at Cody on Jan. 13.

“All week long we reviewed areas we needed to improve on and focused on areas we need to clean up,” coach Craig Lundberg said. “Against Riverside we wanted everyone to see the floor and talked about getting people in there in certain rotations to see how they do.”

The Riverside Rebels have only one senior and one junior on their roster, and Friday’s game quickly turned into a rout as the Bulldogs scored the first 14 points of the game. Lovell went on to lead 24-2 after the first quarter and might have shut the Rebels out except that an improper scorebook entry resulted in a technical foul and two free throws for the Rebels, which Justen Miller hit. The Bulldogs forced 12 turnovers in the first quarter and had none themselves, unofficially.

After that, Lundberg called off the dogs and played his entire bench. Lovell outscored Riverside 11-6 in the second quarter, 14-2 in the third and 13-4 in the fourth. Ten players scored in the game, and a number of young players saw significant playing time, including Ben Cornia, who scored 8 points, and Jeremy Schneider, who added 6.

“Ben did really well when he came in. He hit a three for us,” Lundberg said. “Jeremy has done some good things all year. It was pretty balanced all the way around.”

Trace Murphey led Lovell with 13 points, 10 in the first quarter, and Kyle Wolvington added 9, Cornia, Kaleb Mayes and Ben Snyder 8 each. Lovell finished with 21 assists on 27 field goals led by Snyder with five, Riley Abraham and Brandon Teter four each. Snyder and Kaleb Mayes had four steals each, and Mayes led the team with five rebounds.

Saturday’s game was a thriller as the Bulldogs defeated their longtime rivals, the Wyoming Indian Chiefs.

Saturday’s game proved that teamwork can defeat one incredible player as the Bulldogs had five players with 8 points or more to overcome Wyoming Indian senior guard Buell Robinson, who scored 28.

It took the Bulldogs a while to get going as they struggled early and trailed 17-10 after the first quarter and 23-14 midway through the second. But then Lovell clamped down on defense and held Wyoming Indian scoreless in the final three minutes of the first half and outscored the visitors 16-0 to lead 30-23 at halftime.

Ben Snyder got the run going with a power follow, then Kyle Wolvington cashed a three-pointer. Snyder stole the ball for a layup, then tied the score at 23 with a turnaround jumper. Brandon Teter drained a trey to put Lovell on top, and Snyder stole the ball again for a bucket. Trace Murphey finished the quarter with two free throws.

“This was the first time we’d seen Wyoming Indian since the beginning of last season,” Lundberg said. “We started in a man to man, wanting to pack the paint and pinch the middle to keep Buell out of the paint. But he was still able to slice in there and get good looks against our man to man.

“We went to our 1-2-2 zone near the end of the first quarter and held them to 6 points in the second quarter.”

Noting that Snyder scored 10 points in the second quarter, Lundberg added, “That kid comes off the bench and is a high-energy guy. He thinks the game really well. We kind of got them rattled a little bit, which was kind of unusual.

“They played a match-up zone and extended it out high. We were able to get low-to-high and high-to-low looks, and when they went man-to-man we looked to get the ball in to Trace.”

Lovell came out strong in the third quarter and outscored Wyoming Indian 9-5 to lead 39-28, then went stagnant on offense as the Chiefs outscored the Bulldogs 10-2 the rest of the quarter to cut the deficit to three, 41-38. The Bulldogs reasserted themselves in the fourth quarter with a 6-2 run that left them up 47-40, and they held off the Chiefs the rest of the game, never letting them get closer than five points. Murphey had 7 points in the fourth quarter.

“They went to some full-court and three-quarter-court pressure, and the boys did a good job staying relaxed  and not panicking, making the right pass and not dribbling too much,” Lundberg said. “We have two or three guys who will bring the ball up, which makes it nice. Kaleb (Mayes) over the last couple of weeks has had a nose for the ball and has been in the right place at the right time with some key rebounds and assists – doing the little things to help us out.

“They all just work really hard. Their work ethic is growing as they gain confidence. That’s what you really want to see as they embrace that.”

Murphey finished with 15 points to lead the Bulldogs, and Teter added 12 points, Snyder 10, Wolvington 9 and Mayes 8. Lovell hit the boards hard with Mayes pulling down nine rebounds, Murphey eight, Snyder and Teter seven each. Wolvington had four assists and three steals, and Snyder had four steals.

The Bulldogs will take to the road for two important conference games as the regular season enters its final two weeks, playing at Greybull tonight (Thursday) and in Cowley Saturday against the Rocky Mountain Grizzlies.

“We’re pleased with the first half of our conference schedule, but we need to keep working hard in the next two weeks. We need to have a strong second half of our schedule,” Lundberg said. “We have two really tough ones in Greybull and Cowley. Both are really tough places to play in against teams who are fighting for their conference spots. They will want to play well for their fans, and we’ll have to be mentally focused to play in that environment.”

Lundberg said the keys against Greybull and Rocky Mountain are the same.

“We need to limit their transition points and force them into spots they’re not comfortable in,” he said. “We need to force them out of their sets and make sure we’re contesting their shooters. We can’t have any mental breakdowns.”