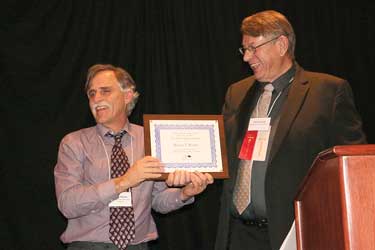 This is only the fourth time the award has been given in more than 20 years. It is awarded to a person who puts forth an extraordinary effort to protect access to government information.

Former Lovell Chronicle publisher Pat Schmidt, who hired Moats out of the University of Montana in 1978, presented the award to Moats on the evening of the final awards banquet at the Little America Hotel and Resort on Jan. 21.

“Thank you for the honor of introducing someone who really has made, and is making, a difference for all the people of Wyoming,” Schmidt said in his remarks about Moats. “Almost four decades ago I hired a young man as a reporter for The Lovell Chronicle.  While working on the family ranch and as a logger, he had graduated with high honors from one of the leading journalism colleges in America, the University of Montana. As would be the case throughout his career, he quickly grew to know our community and win acceptance.

“One example of his ingenuity: Lovell is about a dozen miles from one of the greatest boating and water skiing reservoirs anywhere, 70-mile-long Big Horn Lake. Of course, with only a beginning reporter’s salary, he couldn’t afford a boat. But this young man was blessed with sly, crafty ways that almost all of you and I now recognize. What he could afford to buy was the very best, top-of-the-line, almost one-of-a-kind slalom water ski, one that soon had boat owners inviting him (and his ski) to join them on the lake.

“You all realize good employees are the key to a great newspaper. Starting the day he was hired, this young journalist helped improve the Chronicle regularly.”

Both the Lovell Chronicle and the Sheridan Press, where Moats later became editor, were named the top WPA newspapers in their division at least once during his tenure, Schmidt said.

Schmidt poked some fun at his former colleague, as well as himself.

“Obviously, height didn’t figure into my decision to hire Bruce,” Schmidt said. “His quick wit did. A few months into his stint at the Chronicle, I suggested we could create a house ad picturing our 6-8 darkroom technician standing back to back with Bruce, a foot shorter (maybe?) with the message, ‘The Chronicle provides you with the long and the short of the Lovell news!’ Bruce quickly insisted that I should be the third person in the picture–using the added message, “with wide coverage.”

Schmidt noted that he hired “two other outstanding newspaper professionals in Lovell who are here tonight,” noting that both produced award-winning work for the Chronicle, especially in photography. He introduced siblings Milton Ontiveroz and Cecilia Moats, the son and daughter of Milt and Inez Ontiveroz of Lovell.

“You know Cec better as the Deputy Director of the Wyoming Press Association, Mrs. Bruce Moats, and Milton, of course, has been the UW Institutional Communications Specialist for well over a quarter century.”

While at Sheridan, Bruce was elected to the WPA Board of Directors and spearheaded efforts to strengthen Wyoming’s open meetings and records laws, Schmidt said.

“That WPA work piqued his interest in practicing law, so in 1991 he took a job at the University of Wyoming News Service with the intent of becoming a lawyer,” he said. “In 1996 fellow students elected him the outstanding graduate of their University of Wyoming College of Law class. Bruce Moats, the old reporter, the top student in his class, predictably was named editor of the UW Law Review.

“Bruce now has a solo practice, with emphasis on citizen access to government, civil rights and employment law. He represents newspapers and other media outlets and is admitted to practice before the Federal and State courts of Wyoming and the 10th Circuit Court of Appeals. For the last 20 years, Bruce has helped the WPA with legislative issues, serving for more than a decade as one of the association’s lobbyists.

Buffalo Bulletin publisher Robb Hicks, a two-term president of the WPA, said, “From his days as editor of the Sheridan Press to arguing cases before the Wyoming Supreme Court, Bruce has tirelessly defended the public’s right to know. He has fearlessly advocated for newspapers and the public at large regarding access to public documents or to ensure that meetings are held in the light of day.

“Without his efforts I am certain Wyoming government would be less open. His thoughtful, convincing arguments have won the day in both the courtroom and on the legislature floor. Anyone who cares about open democratic government will forever be indebted to Bruce Moats’ relentless efforts on behalf of public meetings and of access to public records.”

Schmidt said the rarely presented Milton Chilcott Award goes to newspaper industry members “who put forth extraordinary efforts to guarantee the right of citizens to access public information,” adding, “I witnessed the late “Chili” Chilcott spending more time and money battling for freedom of information and open meetings than any person in Wyoming history. This included many court cases involving his beloved Sheridan Press and several decades as the unpaid lobbyist for the WPA at sessions of the Wyoming Legislature.

“There is no doubt in my mind Bruce has provided courage for every newspaper, entity or individual that has had to dig into hard-earned funds to battle government agencies. On behalf of us all, thank you, Bruce.”

Moats received four standing ovations during Schmidt’s remarks and the presentation of the Chilcott Award, a testament to his effective work for Wyoming newspapers.