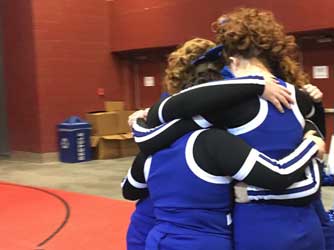 Coached by Renae Miller, the cheer team topped the field with 65 points, edging out Burlington, which tallied 64.167 points. Kemmerer was third with 53.5 points.

Alternates Hannah Sawaya, a junior, and Adaline Dickson, a freshman, filled in and performed with the team during regional and state basketball.

Coach Miller said she appreciates the help of the two alternates, as well as former coach Minda Ohman, who gave her direction and assistance during the season, and Athletic Director Joe Koritnik.

“At first we thought the routine was almost a little too hard for our level,” Miller said, “but Chelby told me, ‘Nope! They can do it. They’ll work it out.’ And they did.

“They rose to the level of the routine, which helped us. It was fast-paced and had some difficult transitions built in and difficult jumps. There were three consecutive jumps without a break in between, which increased the degree of difficulty…They worked on their jumps in practice and with Cathy Thompson through her gymnastics class.”

But even more than the routine, Miller said, was the attitude and confidence the team showed.

“They went in there and put their hearts into it. They owned it,” she said. “They did the best they could ever do. There were absolutely no deductions.

“I had preached to them that judging is subjective  and all we can do is for everyone to do the best she can do. When they finished I asked if they did that and they said yes. They did, and that got them the championship.”

One thing that helped, Miller said, was the unified look the team presented, from hairpieces to their uniforms.

“They looked sharp,” she said.

Miller noted that the Lovell cheer program is hosting a cheerleading camp August 7-8 at the high school to help the team develop and progress in their skills. The camp will be put on by the National Cheerleader Association. Topics will include how to perform stunts safely as well as a variety of cheers, dances and jumps, Miller said.

The Lovell High School Dance Team had a strong day, placing third in the Class 3A jazz dance competition and fourth in the hip hop division. The dance team earned 70.333 points in jazz dance, just behind Star Valley with 73 points and ahead of Riverton with 68.667 points.

Reber said Whitney Grant was her assistant this year, and she also received help from Darece Grant, who assisted with organizational duties.

“It was a different routine than we’ve ever done before,” Reber said. “It was emotional and elegant.”

Judges’ comments included “absolutely loved the song” and “loved the costumes,” as well as “nice choreography” and “well executed.”

“It was a modern take on jazz,” Weber said. “They did awesome with it. The judges really liked it.”

Hip hop was a “very, very, very tough division,” Reber said, noting that the Lovell routine lost some points because of the degree of difficulty of the routine.

“They progressed so far this year from camp to State. We only had two returning girls. The rest of the girls were new and some of them had little to no dance experience.”

Reber pointed out that the Lovell team was the smallest school competing in Class 3A – the only 2A school – and yet the jazz team still placed third.

“We have to compete in 3A with much larger schools,” she said.

The Rocky Mountain High School cheer team placed fifth in Class 2A Non-Stunt with 52 points, edged for fourth place by Cokeville with 52.167 points.

“We had a wonderful year,” Sally Bernhisel said. “The girls performed great all season long, especially doing well with their stunting and their crowd cheers and getting the crowd going. I’ve been so proud of them.

“State was two minutes and 30 seconds of hours and hours of cheer time. This year it didn’t turn out the way we’d hoped, but I couldn’t be more proud of those girls. I don’t think they did any less or better than they possibly could have. They were so good about working hard and putting in those extra hours to be able to do that. We had a great season, and I’m very proud of my girls.”