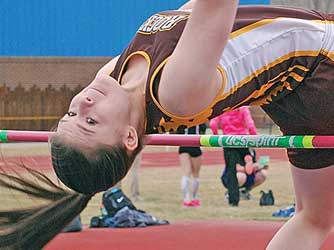 It was a strong start to the 2017 spring track and field season for the Rocky Mountain Grizzlies Saturday as both the Grizz and Lady Grizz placed near the top in the 11-team field at the Bill Gerrard Memorial in Greybull.

Official results show the Grizz finishing second to Big Horn, 172-154.5, but Rocky coach Tobee Christiansen said Big Horn was improperly awarded points in the 400-meter relay because the top Ram team was disqualified for a handoff out of the exchange zone and the Big Horn “B” team had not been designated as the scoring team. Another Big Horn “B” team was also awarded points improperly in the 1,600-meter relay, he said, and thus, the Grizz likely won the meet.

“I would imagine they’ll change it,” Christiansen said Monday.

One of the highlights was the one-two-three finish in the high jump for the Grizzlies. Junior Lathan May won the event, clearing 6-2, and junior Jonathan Allred placed second, sophomore Ethan Price third, both at 6 feet. Allred placed second based on the number of misses.

“Lathan hasn’t spent a lot of time on it this year yet. It’s nice to see them go one, two, three and all three get prequalified (for State),” Christiansen said. “That takes a little stress off of them.

“It was fun to see. It’s always good to look down there and see all three (still left jumping) wearing your school jersey.”

Another highlight for the Grizz was the performance of the hurdlers: juniors Tristan Jewell and May and senior Gehrig Sweat.

Jewell won both the 110-meter high hurdles and the 300-meter intermediate hurdles. He prequalified for State in the 110s, running a time of 16.23, and Sweat also prequalified in the event, placing third in a time of 16.52. May placed seventh at 17.9.

“He looked strong; he ran well,” Christiansen said of Jewell. “He’s a little taller, a little stronger, a little faster. Both (Jewell and Sweat) are just a little off where they were last year. I think you’re going to see them both down in the 15s this year.”

Zac Zier won the discus and easily prequalified for State with a throw of 149-11. Christiansen said Zier scratched on a throw of around 160 feet that brought a gasp from the spectators and should soon be throwing consistently the upper 150-foot range.

“It was fun to watch,” Christiansen said.

Austin Grohman placed sixth with a personal record throw of 109-11, Coach C said, and Brenen Hinckley was eighth at 104-9.

Zier also placed fourth in the shot put with a throw of 42-2½.

The Rocky 400-meter relay team of Sweat, May, Jewell and Cole Simmons prequalified for State with a winning time of 46.21, “and we’ve got some room for improvement, too,” Christiansen added.

“Dominic ran in a lot of stuff,” Christiansen said. “We used it as a conditioning meet for distance guys.”

Noting three placers in the 400 and two in the 800, Christiansen said, “It’s fun to see that middle distance stuff come around. We’ve struggled with that in the past.”

The 1,600-meter relay quartet of Wyatt Horrocks, Travis Simmons, Spencer Hedges and Zack Milbrad placed fourth with a time of 4:14.81, and the team of Horrocks, Justin Dausman, Drewes and Watts placed second in the 3,200-meter relay, covering the eight laps in 10:01.95.

Thrower Mikayla Campbell had a strong meet to start her senior year. She won the discus competition with a throw of 95-7, and although final results showed her winning the shot put with a throw of 36-2 ½, she informed coaches that her best throw was actually in the 32-foot range, which would place her third or fourth.

Fellow senior Livia Higgins returned to action after a year off and placed third in the 100-meter intermediate hurdles with a time of 18.93 and third in the 300-meter low hurdles at 55.06.

“I thought she looked pretty strong in the 300 hurdles,” Christiansen said. “Her steps looked good.”

Lady Grizz sprinters ran well in Greybull. Senior Marissa Arnold placed fourth in the 100-meter dash with a time of 13.76 followed by Hedges in sixth place at 13.96 and Aubrianne Crosby seventh at 14.06. Six others placed in the top 20.

The Lady Grizz placed three in the high jump. Senior Brianna Brumwell placed second by clearing 4-8, and senior Mya Meier placed fourth and sophomore Gabie Christensen eighth, both at 4-6, with the finish depending on the number of misses during the competition.

Crosby appeared to have a record-smashing jump in the long jump as the results showed a first-place jump of 21-7½, but Christiansen said meet officials got the numbers backwards and her jump was 12-7½.

The girls 400-meter relay team missed prequalifying by less than 2/10s of a second, Christiansen said, placing second with a time of 54.63. The sprinters were Townsend, Marissa Arnold, Hedges and Crosby.

“For the first time running it, that was good, and we had three freshmen in it,” the coach noted.

The 1,600-meter relay quartet of Naomi Alcala, Abby Arnold, Jasmine Holzwarth and Jacey Ross placed second with a time of 6:01.09, and the foursome of Holzwarth, Katelyn Wood, Twomey and Jacque Leonhardt ran a time of 13:05.31 as the only team in the 3,200-meter relay.

The Grizzlies will host the Rocky Mountain Invitational Saturday in Cowley. Christiansen was still working on the schedule at the time of Monday’s interview but said the meet would start at 9 a.m.

Rocky boys results in Greybull were:

Rocky girls results in Greybull were: