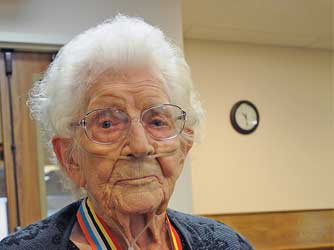 In a moving ceremony Monday that brought back many memories for those involved, late former area resident Aaron Owen was honored posthumously with the Ambassador for Peace Medal from the Republic of Korea for his participation in the Korean War in the early 1950s.

The medal was presented to Owen’s widow, Marjorie, at the multi-purpose room of the New Horizons Care Center in Lovell by Paul Linse, Commander of American Legion Post 32 in Greybull.

According to Aaron and Marjorie Owen’s daughter, Madeline Kraft of Greybull, Aaron grew up in Anton, Texas, and attempted to join the military when he was 10. He was, of course, rejected, but he eventually made his way west to Cody and worked with the Civilian Conservation Corps.

He married Marjorie Godfrey of Cowley and enlisted in the Army. He fought in World War II in the Pacific Theater. He spent nearly all of the war away from home.

Kraft recalled that her father went to work for Pure Oil in Worland and was working there when, as a member of the Wyoming Army National Guard, he was called to active duty in the Korean War.

“We moved to Ten Sleep to live with the grandparents (Ernest and Jessie Godfrey),” Kraft said.

After Aaron’s discharge from the Army, the family moved to Cowley and Aaron and Marjorie added a son, Tim, to the family. Aaron worked for Claude Lewis on a ranch near Warren, Mont., and after experiencing problems with his heart moved to Lewistown, Mont., and on north to Lloyd, Mont., working for a ranch near the Bears Paw Mountains.

He eventually returned to Cowley and died in 1975 at age 57. Marjorie went to nursing school and worked as a nurse’s aide for many years, mostly at the Wyoming Retirement Center in Basin, sister Peggy Rasmussen said. She also worked for her son Tim in Texas, cooking for his company in the oil fields. After living in Basin for several years she entered the New Horizons Care Center in Lovell about 10 years ago, Rasmussen said.

Linse said he received the medal from Republic of Korea (South Korea) Consul General Shin Chae-Hyun on behalf of Aaron Owen on March 22 in Lander and brought it to Lovell to present it to Marjorie at the care center. Also in attendance Monday were both children — Madeline Kraft and Tim Owen — as well as Tim’s children Aubrey Owen of Basin and Deaun Tigner of Manderson and Marjorie’s sister Peggy Rasmussen of Cowley and her son-in-law Don Minchow of Cowley. Linse also presented Madeline Kraft a special service coin from Gov. Matt Mead.

The Republic of Korea has presented Ambassador for Peace Medals to Korean War Veterans across the country, including many in Wyoming and several from Big Horn County. Linse said the medal is given by the government and the people of South Korea to express their gratitude for the service and sacrifice of the American servicemen and women during the war.

“The Korean people and the Korean government have expressed profound gratitude for American veterans,” Linse said in his remarks Monday. “No longer is this the forgotten war. That means a lot to them. They have bestowed the Ambassador for Peace Medal to all Korean veterans.”

Linse read a proclamation from Shin Chae-Hyun that included the words: “It is a great honor and pleasure to express the everlasting gratitude of the Republic of Korea and our people for the service you and your countrymen have performed in restoring  and preserving our freedom and democracy. We cherish in our hearts the memory of your boundless sacrifices in helping us reestablish our Free Nation.”

Each Korean War veteran is proclaimed an Ambassador of Peace, according to the Republic of Korea proclamation, which finishes “Let each of us reaffirm our mutual respect and friendship that they may endure for generations to come.”

Lovell native and longtime Greybull resident Bill Shumway, who now lives at the care center in Lovell, served with Aaron Owen in Korea, both as members of the 300th Armored Field Artillery Battalion, assigned to Service Battery.

“He was our mess sergeant, and a dang good one,” Shumway said. “You’d come back from being out in the field and he’d have some biscuits with butter and jelly waiting for you. He also made good cinnamon rolls. He was known over there for his cooking. The officers had him cook their meals for them.”

One of Shumway’s favorite stories is about Owen serving up a meal to the officers but demanding that they remove their hats before eating, saying, “If you’re going to be in my mess hall you’ll take your caps off.”

“You had to be nice to him if you wanted to eat,” Shumway said. “We called him Hawkeye, because you couldn’t get into his mess without him knowing it.”

Another time Shumway was on a run to collect the brass shell casings from Army howitzers and Owen wanted to see the big guns fire from behind them so he could follow the path of the shells. Shumway collected a load of casings and was waiting for Owen, who soon arrived and said, “Let’s get out of here.” The Americans started receiving “incoming mail” from the enemy, Shumway said, and he and Owen moved the truck just in time.

“Where I was parked, a shell hit there,” he said.

Shumway has also received the Ambassador for Peace Medal.