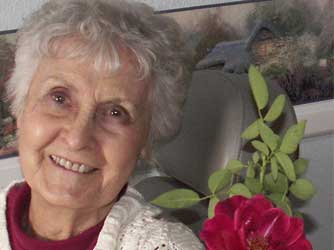 Her husband, Edwin Jennings NeVille, who lived to the age of 99 ½, preceded her in death. They were the longest married couple living in the United States when Ed died on April of 2015, a marriage of 81 years and four months.

Jeri was born in Byron but at age 5 attended first grade in Elk Basin, where her father, Alex, was employed. Her family also lived for a short time in Lovell, Powell and in Downey, Idaho, before they settled permanently in Byron.

There, she met her future husband, Ed NeVille, who was also born and raised in Byron. They were active members of the Church of Jesus Christ of Latter-day Saints, lived a long, happy and productive life together and will be well remembered and missed by family and friends. Their marriage was solemnized in the Salt Lake LDS Temple. Ed and Jeri had 18 grandchildren and 48 great-grandchildren.

A memorial service was held in the LDS Byron Ward on Wednesday, April 12, at 2 p.m. Interment took place in the Byron Cemetery following the services.