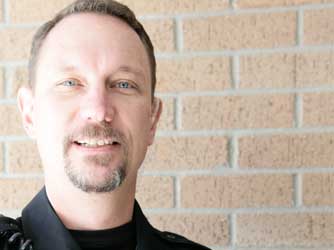 There’s a new officer on the beat in Lovell and he brings with him a wealth of professional experience in the law enforcement field. LPD officer Dan Laffin joined the force on a part-time basis earlier this month.

“We’re excited to have Daniel join our staff,” said Chief of Police Jason Beal. “He brings a great deal of experience as an officer, academy instructor and detective.”

Laffin and his family moved to the area recently to help his mother and stepfather develop their new business, a vineyard on Cannery Road between Lovell and Cowley. He said he was excited to see the part-time opportunity where he could utilize his many years of training and experience in law enforcement, while continuing to help the family with the new business.

Laffin previously performed a number of different roles with the Killeen, Texas, police department, serving a community with a 150,000 population. He said, though he didn’t get calls for loose livestock or moose on the loose in Killeen, in many ways the job is similar and the skills he brings with him are very compatible with the needs of the Lovell Police Department.

As a detective in the Killeen Special Victims Unit, Laffin saw about 16,000 criminal cases of domestic violence go to court each year. In the course of his duties as an SVU detective he became a specialist in testimony and trained many to recognize the signs of that type of crime.

He said the department in Killeen responded to about 200,000 calls per year and had its own academy, where he taught new officers for about two years, noting that young recruits in an urban area like Killeen “saw it all” in their first year on the force. Laffin also has experience in firearms instruction and emergency vehicle operation, as well as experience in drug enforcement.

Laffin retired from the military after more than 20 years in the U.S. Army. As a part of that duty, he saw combat four times, each time for more than a year.

He said he and wife and children are already enjoying the area. He said they are already seeing the benefits of the excellent schools and close-knit community.