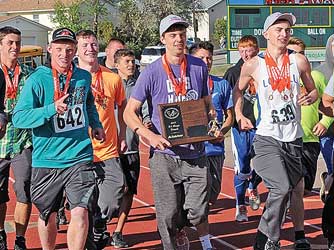 The trophy is coming to Lovell again.

After two years in Class 3A, where they didn’t have the depth to compete for a state title in track and field, the Lovell Bulldogs won the Class 2A state boys title over the weekend in Casper, Lovell’s third boys title since 2010 and the school’s seventh during that time frame (including four girls titles).

The Bulldogs topped the field with 103 points, challenged by local rival Rocky Mountain, who finished second with 85 points. Big Horn placed third with 75 points, Upton fourth with 63 points and Kemmerer fifth with 51.

“It was really satisfying. So much effort and hard work went into it,” head coach Joshua Sanders said. “I think this is my hardest working group and the most focused group we’ve had. I do feel we worked harder this year than other years.

“There were times later in the season where we just didn’t want to be there, they had been pushing so hard. It was a grind. We really felt that feeling you get when you work for something and you get it, you accomplish it. Track and field is tricky. You’re pushing your body pretty hard.”

On the first day of practice in March, coaches took the team to the Sand Hills between Byron and Cowley and dropped them off below the rim and directed them to run uphill more than a mile to the top.

“Our only instruction was to get there as quick as you can,” Sanders said. “You could tell by the effort they put in. Even the slower kids were pushing as hard as they could because they wanted to live up to the expectations. We talked to them about what our expectations were for them to accomplish what they need to.”

Keys, Sanders said, were laid out as 1) Work hard; 2) Become knowledgeable about the sport; 3) Be committed to getting better.

“All of the coaches spelled out that this is what it’s going to take for you to get better and be the best that you can be,” the coach said.

Did the athletes embrace the challenge?

“More so than any other group,” Sanders replied. “At meets you could look around and see the kids doing the right thing – getting into the zone for preparation.”

The core of success

Sanders said the middle-distance runners were at the core of the Lovell boys’ championship.

“They set the tone,” he said. “We’ve got kids there in that group that are going to give everything they’ve got. That’s the core.”

Sanders noted the performance of juniors Porter Nichols and Dalton Nixon in the 400-meter dash. Nichols set a new personal record and broke his own school record to win the event Saturday afternoon in a time of 50.49. Nixon placed fifth with a personal record time of 51.93.

“Dalton improved his times every week this season,” Sanders marveled.

“That was awesome. That’s a huge amount of points,” Sanders said.

Another highlight was the performance of Mayes in the 1,600 meters on Saturday afternoon. Running the event for only the fourth time in his track career, the senior placed second with a time of 4:44.23, a full 15 seconds faster than his personal record and 19 seconds faster than he ran at Regionals a week earlier.

“We’ll miss him next year,” said Sanders, adding that Mayes was only three seconds behind the winner, Louis Failoni of Kemmerer.

A spring snowstorm that struck the state Thursday forced all field events to Friday and Saturday and left only two events on the schedule for Thursday – the 3,200 and the 3,200 relay. Friday was still raw and wet as meet workers worked to dry runways and throwing rings. The storm had finally moved out by Saturday, and the weather was much better, with little or no precipitation and partly sunny conditions.

Because of the cold and snowy conditions on Thursday, the Lovell 3,200 meter relay team was unable to make a run at the Class 2A state record, but the foursome of Mayes, Nixon, Ben Cornia and Nichols won the event by 14 seconds over Kemmerer with a time of 8:49.19.

“Since they couldn’t shoot for the record, they decided not to burn themselves out for other events,” Sanders noted.

Junior sprinter Will Lillard had a strong meet. On Saturday morning he placed fourth in the 100-meter dash with a time of 11.67, and later in the day he placed second in the 200-meter dash, powering around the half lap in 23.31, just 7/100ths of a second off of his personal record.

“He’s been awesome for us,” Sanders said. “He’s already saying he wants to be in even better shape next season.”

The 400-meter relay team of Tyler Teter, Brent Snyder, Jacob Grant and Lillard struggled a bit with their handoffs and placed fourth with a time of 45.67.

In the final event of the meet, the team of Lillard, Mayes, Nixon and Nichols broke their own school record in the 1,600-meter relay set a week earlier and placed second with a time of 3:31.11.

The Bulldog triple-jumpers kind of redeemed themselves Saturday, Sanders said, after not performing as well as they would have liked at Regionals. Senior Brandon Teter closed out his career with a third-place finish, jumping 41-8½, Brenden Lundberg placed fourth with a leap of 41-3¾ and Brent Snyder placed fifth at 41-½. The 3-4-5 finish gave the Bulldogs 15 valuable points.

“After disappointing at Regionals, that was my challenge to them – to be better,” Sanders said. “I was proud of them. That was big for us point wise.”

Snyder also placed second in the pole vault, clearing 12-6, and though that height was a foot lower than his PR set the week before, almost all of the vaulters were well below their PRs due to the rainy weather on Friday, Sanders pointed out.

In the throws, senior Kyle Burton closed out his career with a fifth-place finish in the shot put Saturday, heaving the orb 45-6¼.

“That was big,” Sanders said. “Kyle had a good regional and state meet to finish things out.”

Other Lovell boys results at the state track meet were:

Among the Lady Bulldogs’ highlights, Sanders said he was pleased to see the 400-meter relay team of Andrea Monterde, Trysa Flood, Mikkel McIntosh and Emily Snell win the always exciting race with a time of 52.38 Friday afternoon. It was the team’s best time of the season despite the cold conditions.

“It was awesome that they were able to win a state title,” Sanders said. “I’m really happy for them. We did a lot of mixing and matching throughout the year. I thought we had a good crew at the end. I was really happy for (senior) Emily Snell that she could go out that way.”

Snell also placed fifth in the 100-meter dash Saturday morning, recording a time of 13.38, and she later placed eighth in the 200-meter dash, running the half lap in 28.07.

“What really jazzed us was the four-by-four relay team at the end of the meet. They ran 14 seconds faster than last week and were three seconds from winning the race. We did not see that coming.”

In the meet finale, the quartet of Shelby Wardell, McIntosh, Bailey Mitchell and Flood ran a time of 4:20.92 and placed fifth but was just three seconds behind winner Pine Bluffs as part of a log jam at the end. The Hornets ran 4:17.74.

“I was proud of all four of them but really proud of Trysa and Shelby,” Sanders said. “They were the torch-bearers. As freshmen then ran in the two and three spots (for Lovell’s winning team), and now they are the anchors. They took the torch from Kim (Robertson) and will now be passing it on.”

Flood ended her jumping career on a high note, smashing her personal record in the triple jump by more than a foot to place third, sailing 34-4.

“It was not only a PR, it was four inches from winning – and she did it on her last jump,” Sanders said. “Trysa is the epitome of an athlete who was always physically and mentally prepared for her events. Not many jumpers can hit a PR on their last jump.”

Sanders said he was proud of sophomore Karlee Burton for placing fifth in the 3,200 meters Thursday under “the worst conditions.” Burton ran a time of 13:25.63, nearly 33 seconds faster than she ran the race a week earlier in Lander.

Shelby Wardell wrapped up her successful pole-vaulting career with a second place finish Saturday as she cleared 9 feet. Though she didn’t match her goal of a state title, Sanders said he was proud of the senior.

“That was a tough break for Shelby,” he said. “She’s happy to be all-state and hold the school record, but I know how hard she worked to be a state champion and it just didn’t happen, through no fault of her own. I’m still proud of her for what she did.

“Injuries at the end of the season cost us. We were like a wounded bird at the end. But the girls showed the same mental focus and work ethic the boys did.”

Other Lovell girls results at the state track meet were: