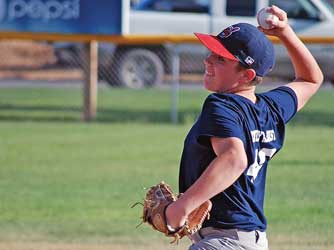 Wednesday, the MTI Nationals took care of the Powell Cardinals 11-3 at the Northeast Complex to advance to the championship game. Dawson Sweat rapped four hits for the Nationals, including a home run, and William Spann had three hits, Satchel Ginest two. Sweat led the Nats with four runs batted in and Spann had two, Ginest one.

The Cowley Recreation District Indians defeated Greybull in a close game 3-2 at the Northeast Complex Wednesday to advance to the championship game.

“That was one of the tightest, toughest games we ever played,” coach Ryan Mangus said. “Good base running paid off on a night when our hitting was off.”

The Indians and Nats duked it out for the Interleague title Thursday at the Northeast Complex. The Indians bounced back from trailing 4-0 by scoring two runs in fourth and three runs in the fifth to take a 5-4 lead going into the final inning.

After the Nats tied it up at five apiece, the Indians loaded the bases and won on a walk-off catcher’s interference call.

Preston Nichols and Minemyer recorded two hits apiece for the Tribe. Keldon Boettcher rapped two hits to lead the Nationals. He led the team in RBIs with two while Blake Wilson and Sweat had one apiece.

“It was just a great Little League Baseball game,” Mangus said. “It was one of the best I’ve ever been a part of.”

Minors tournament play resumed Thursday as the Synergy Construction Dodgers defeated the Powell A’s 13-12 in a semifinal game at Homesteader Park in Powell.

The Bairco Braves defeated the Wilson Brothers Construction Cubs 8-7 in the other semifinal game in Powell. Owen Walker led the Braves with two hits and also in RBIs with two.

Friday, the Braves defeated the Dodgers 5-2 to win the Minors Interleague Championship game in Powell.

“I’d like to congratulate the Dodgers on a fantastic season,” coach Jake Walker said. “Over the last couple of years they’ve built a program that has been the benchmark in the Minors that the rest of us have been working toward. It’s amazing to see these young ball players step up in the moment.

“The championship game was really a reflection of our season and that is winning the game with pitching and being sound defensively. Matthew Newman really was huge for us and threw 4 2/3 innings, only giving up one run, and Kaeson Anderson was clutch, closing out the game by pitching 1 1/3 innings, also giving up just one run.

“Our kids worked hard and played well defensively. We didn’t make many mistakes, which was huge for our confidence. We did a good job at the plate against a great pitching performance from Rudy Hall, who threw a lot of strikes.”

Walker also talked about the great season that his team and the rest of Little League teams had this year.

“Overall it was a great season,” Walker said. “It was a pleasure working with these kids. We have great youth in our area. The future for Big Horn Little League is bright with all four teams in the championship games from Majors and Minors coming from our league.”

The Big Horn Little League program is now gearing up for the all-star portion of the season as tryouts were held Monday and Tuesday. Big Horn will have a 10U and a 12U all-star team.

“Now it’s all-star season, so good luck and congratulations to all those who made all-stars,” Walker said.

First round and Quarterfinals