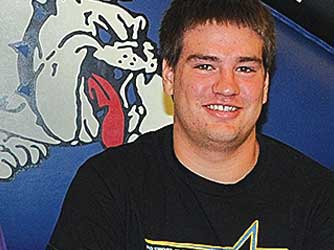 Recent Lovell High School graduate Trace Murphey had a big decision to make as his playing days for the Lovell Bulldogs wound to a close. A multi-sport athlete, he was recruited to play both football and basketball  in college. But in the end, his love of basketball won out and he signed Friday to join the men’s basketball team at Sheridan College.

An all-conference offensive tackle for the Bulldog football team, the 6-6, 250-pound Murphey was recruited by Rocky Mountain College, but he also made contact with the men’s basketball programs at Northwest College and Sheridan College. In the end, he chose hoops.

“I’ve just always loved basketball more than football, and I’ve always wanted to play college basketball,” he said after signing his letter of intent Friday. “Sheridan offered a scholarship, and I like the Sheridan program. It’s a good one.”

Murphey has received an athletic scholarship, as well as the Bruce Hoffman Scholarship.

He is the son of Scott and Shelley Murphey.

The big center led the Lovell Bulldogs to a 21-6 record and a third-place finish at the state tournament in March. He was Lovell’s go-to man on the inside, coach Craig Lundberg said, averaging 15.1 points to lead the Bulldogs in scoring and finishing second in the 2A Northwest. He also led the Northwest and the team in rebounding, pulling down 7.6 boards per game. He shot 67 percent from the field and 63 percent from the foul line.

He was named 2A West All-Conference and 2A All-State following the season.

Murphey said he started receiving interest from college coaches following his 22-point performance against University of Wyoming signee Hunter Thompson of Pine Bluffs in the state tournament third-place game, a 75-64 Lovell win over the 26-1 Hornets. He hit nine of 10 shots from the floor against Thompson.

One of the coaches who noticed was Sheridan’s Matt Hammer.

“The good thing about Trace is that he has the work ethic to expand his game,” Lundberg said. “He has the ability to hit the outside shot. We didn’t showcase it that much in high school. Trace has an innate ability to be where the ball’s at. He knows where to be.

“If he works his tail off he’ll be one of those guys, a blue collar guy and a role player at first. If he works hard, that role can expand as he progresses through college.”

Lundberg said Murphey is effective in the paint.

“One of the biggest things is Trace’s ability to use his body and his footwork down low,” the coach said. “He knows how to seal in the paint and take his man where he wants him.

“Trace has always had great hands and a real good feel for the game. People think he’s just a big guy,
but he has skills. People underestimate him. He always flew under the radar. Until you play against him you don’t understand that.”