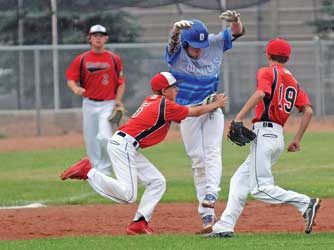 Douglas was scheduled for three games in Cowley, a doubleheader with two seven-inning games on Friday and one nine-inning game Saturday, but due to extra innings in the first game, plus the rainy evening, only one game was played Friday, a 10-inning nail-biter won by the Mustangs 8-7.

Then on Saturday the Mustangs roared from behind to beat the Cats 17-15.

“I hope we’re starting to get that attitude of never quitting,” manager Michael Jameson said. “It’s contagious. A guy will get a hit or get on base, and the next guy will want to get on base, too.”

Douglas scratched out single runs in both the first and second innings against starting pitcher Brock Hill to lead 2-0, but the Mustangs tied the score with two in the bottom of the second on a two-run single by Trey Dickerson down the third-base line that scored Jeremy Schneider and Riley Hill.

Douglas countered with two in the top of the third, but Lovell answered right back with two in the bottom of the frame on a double by Dawson Forcella to plate Riley Abraham and a wild pitch to score Forcella.

After a scoreless fourth, Douglas scored single runs in the fifth and sixth to lead 6-4, but the Mustangs rallied for two in the bottom of the seventh to knot the score and send the game into extra innings. Forcella started the rally with a one-out single, and Schneider blasted a home run to left centerfield to tie the score 6-6.

“That was a clutch hit coming in that situation late in the game,” Jameson said of Schneider’s homer. “It was definitely not a cheap one. He hit that really well.”

After a scoreless eighth, Douglas scored one in the top of the ninth, but Lovell answered in the bottom of the inning on a single by Forcella to score Dallen Mangus.

After Dickerson got Douglas out 1-2-3 in the top of the 10th in relief of Brock Hill, Lovell won the game in the bottom of the inning on Riley Abraham’s two-out single to score Jess Wambeke.

“Riley’s maturity as an athlete, I think, helped him,” Jameson said. “He had the attitude that he wanted to bat in that situation, win or lose. He’s a guy who wanted to be up there. He’s the type of kid who doesn’t mind that situation and wouldn’t crumble under the pressure. He came up with a big hit.”

Brock Hill pitched 8 2/3 innings, allowing seven runs, four earned, on 13 hits but no walks. Dickerson picked up the win with an inning and one third of work, allowing no hits and no runs and fanning one.

“Brock is starting to become a guy we can rely on,” Jameson said. “He’s shown a lot of growth. We’ll take that – no walks and four earned runs. That was the kind of outing we’d like to continue to have out of him. There’s room for growth with Brock. He’s just starting to get comfortable.”

Forcella finished 3-5 at the plate with two runs and two RBIs. Wambeke was 2-5 with a run, and both Dickerson and Schneider had two RBIs apiece.

In the Saturday game, Douglas built a 14-1 lead off Lovell starter Juan Rivera and reliever Dallen Mangus through 4½ innings, but the Mustangs began their comeback with four runs in the bottom of the fifth on a single by Jordan Vasquez, an error and a two-run single by Wyatt Horrocks.

Dickerson took over on the mound for the Mustangs and shut down the Cats’ bats in the top of the sixth. Lovell exploded for nine runs in the bottom of the inning to tie the score 14-14 as Douglas ran into pitching problems, hitting two batters with the bases loaded, walking a batter with the sacks full and allowing a wild pitch for a run and RBI singles by Vasquez, Horrocks, Wambeke and Abraham, plus a sacrifice fly by Schneider.

“We emphasize in a nine-inning game that there’s a lot of time left if you chip away in every inning,” Jameson said, “but a nine-run inning can make up for a lot of zeros. A lot of guys up and down the lineup did a good job doing what we needed to do to keep a big inning going.”

Douglas scored one in the top of the seventh to lead 15-14, but Dickerson shut down the bats in the top of the eighth and the Mustangs took the lead in the bottom of the frame on back-to-back jacks, a two-run homer by Forcella and a solo shot by Schneider to put the ‘Stangs up 17-15.

Douglas got a runner on with one out in the top of the ninth, but the Cats lined into a double play to end the game as Dickerson snared the liner on the mound and threw to Schneider at first to complete the twin killing.

The Mustangs earlier completed a triple play when, on a strike on a ball in the dirt, the Douglas batter broke for first even though the base was occupied. Thinking they had to run, two Cats attempted to advance, and one was tagged out at home, the other at third. A scuffle ensued after the tag at home, but cooler heads prevailed.

“Those were good quality wins against a good team,” Jameson said. “Douglas hits the ball well.”

Again, Dickerson was brilliant in relief, allowing just one unearned run in five innings of work on two hits and no walks with six strikeouts. Forcella was 4-6 at the plate with two runs batted in and three runs scored. Abraham, Vasquez, Horrocks and Wambeke had two hits each, and Horrocks had three RBIs, Forcella, Schneider, Vasquez, Mangus and Cade Dooley two apiece.

The Mustangs will play eight games this week, all of them Class A West contest. The busy stretch starts today (Thursday) when the Mustangs host Riverton at 3 and 5 p.m. The Mustangs then travel to Powell Friday, Green River Monday and Cody Wednesday, June 28, for doubleheaders that are scheduled for 5 and 7 p.m.

“It’s a tough stretch, but a lot of teams are in the same boat,” Jameson said. “Everybody’s trying to figure out how to manage their pitchers and trying to develop the depth to make a run at the state tournament.”