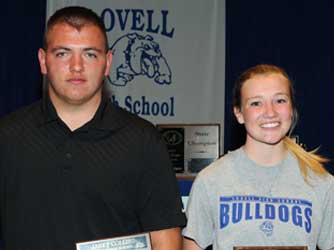 A pair of multi-sport athletes were named the top senior athletes at the Lovell High School Spring Athletic Awards Night Tuesday, May 23, at the LHS Multipurpose Room.

Shelby Wardell and Jaret Collins were honored as the top athletes. Each has excelled in fall, winter and spring sports throughout their high school career.

Wardell, daughter of Betsy Sammons and Dan Wardell, was introduced by Lovell girls basketball coach Chris Edwards, who noted that the LHS senior class had so many deserving athletes that the selection process was very competitive.

Wardell was an all-conference and all-state selection in volleyball last fall, and Edwards quoted coach Kisha McArthur as saying Wardell was very coachable and a quiet leader.

“She always tried to do what was asked of her and was a joy to coach,” Edwards said, quoting McArthur. “Her coach put a lot of responsibility on her shoulders this year as the setter and she did a good job spreading the ball around.”

A three-year letter winner in basketball, Wardell was a team captain and an all-conference and all-state selection her senior year, Edwards said, adding that she was the team’s offensive player of the year this season.

“She had an attitude that she was going to work hard every day and encourage her teammates to do the same,” Edwards said. “Her perimeter shooting was a huge asset to the team, and she became a more well-rounded player this year.”

In track and field, Wardell was a team captain this season and demonstrated an excellent work ethic and mental toughness as she fought through injury to help lead the Lady Bulldogs to a second-place finish at the 2A West Regional Track Meet last week in Lander, Edwards said. In the pole vault she was the regional champion with a 10-2 vault that tied the Lovell school record, and she placed second Saturday at the state track meet. She qualified for the state meet in the 300-meter hurdles and as a member of the Lovell 1,600-meter relay team that placed fifth at State.

Wardell plans to major in physical education in college and become a coach. She hopes to attend the University of Wyoming after NWC.

The son of Toby and Cathleen Collins, Jaret Collins has excelled in football, wrestling and track and field during his high school career.

“I was fortunate enough to have an opportunity to coach this young man over the last two years in two sports,” said presenter Nick DeWitt the LHS head wrestling coach and an assistant football coach. “He was not always the most outspoken athlete, but his actions and work ethic spoke for themselves.”

DeWitt said Collins was a nine-time letter winner in three sports: three in football, four in wrestling and two in track and field. In football, he was named 2A West Lineman of the Year after both his junior and senior seasons, was a two-year all-conference and all-state selection and will play in the Wyoming Shrine Bowl in June.

He was a three-time state placer for the Lovell wrestling team, placing fourth in Class 3A in both 2015 and 2016 and placing third as a senior with only one loss on the season.

Collins will serve a two-year mission for the Church of Jesus Christ of Latter-day Saints based out of Macon, Ga., then plans to attend the University of Wyoming. He said he’s interested in studying law enforcement and may also walk onto the Wyoming football team.

LHS Athletic Director Joe Koritnik opened the awards night by thanking numerous individuals including LHS principal Scott O’Tremba, who he said is “very, very supportive of athletic activities, school secretaries Suzanne Winterholler and Robin Baxendale, booster club president Tashie Lundberg, the Lovell Chronicle staff and all of the LHS coaches and the families who support them.

Coaches DeWitt, Joshua Sanders, Edwards and Craig Lundberg presented letter recipients for the winter and spring seasons. Koritnik said 77 students lettered during the winter or spring, which he said represents “a good portion of the student body.”

Koritnik also noted a WHSAA Sportsmanship Award presented to the Lovell freshman girls basketball team for their conduct during the Buffalo freshman tournament in January.

Finally, Koritnik noted the weekly Bulldog of the Week Award winners for the winter and spring seasons.

Coaches for the LHS winter and spring sports spoke about their seasons and presented individual special awards for their teams as follows:

He named Rocky Mountain senior Zac Zier as the outstanding indoor track and field athlete for his fifth-place finish at the state meet.

Girls basketball – Coach Chris Edwards said many people thought the Lady Bulldogs would be in for a rebuilding year in 2016-17, but the team instead qualified for the state tournament and fought hard in two losses in Casper, leaving “it all on the court.”

Edwards presented three individual awards, naming Mikkel McIntosh as the Defensive Player of the Year for her tenacious play on defense, Wardell as the Offensive Player of the Year for her shooting prowess and Emily Snell as the winner of the Bleed Blue Award for her “fearless mindset and heart over height attitude.” He named all-conference selections Wardell, McIntosh, Snell and Mandi Jo Baxendale (honorable mention) plus Wardell as all-state.

Cheerleading team – First-year coach Renae Miller noted the team’s state championship in the Class 2A Non-stunt Category and thanked all seven members of her competition squad. She presented three individual awards: freshman Madison Reimers as Rookie of the Year, junior Kayla Johnston as winner of the Coach’s Award for her hard work and willing spirit and junior Delanee Miller as Cheerleader of the Year for her hard work and dedication in many areas.

Wrestling – Coach Nick DeWitt said he has seen “amazing improvement” in his two years as head coach, noting the team’s second-place finish at the 2A West Regional Tournament. He said the team had three state placers this season: Quinton Hecker third at 106 pounds, Jaret Collins third at heavyweight and Coy Trainor second at 195.

DeWitt presented three individual awards: the Wilbur Award for outstanding commitment to Kelly and Kerry Powell, the Outstanding Wrestler Award to Collins, noting the senior’s 39-1 record, and the Leader of the Pack Award to senior Joey Mickelson.

Boys basketball – Coach Craig Lundberg said the 2016-17 Bulldogs had an excellent chemistry this year and were a special group because the seniors were freshmen when Lundberg started his career as the LHS head coach. After thanking many
people, he presented four
individual awards as voted on by team members: the Defensive MVP Award to junior Brent Snyder for his tenacious defense that was enjoyable to watch, the Bleed Blue Award to senior Riley Abraham for his leadership and sacrifice, the Offensive MVP Award to senior Tyler Teter for “always hitting the big shot when we needed it” and the Team MVP Award to senior Trace Murphey, who he said not only “led us in scoring but led our team in heart,” calling Murphey “an unbelievable young man with great character.”

Koritnik later noted that Lundberg was voted the Five Rivers Conference Coach of the Year.

Dance – Coach LaraLee Reber said her young team came together really well and had a great season, placing third in jazz dance at the State Spirit Competition. She noted that Kayden Harper was selected for the all-state team as a freshman, which is a rare feat.

Girls track and field – Coach Joshua Sanders thanked his coaches and noted the Lady Bulldogs’ second-place finish at the 2A West Regional track meet last week in Lander. He said injuries down the stretch cost the team points at Regionals and State.

Spring golf – Coach Lundberg said he had 12 golfers this spring, including five who competed at the statewide “conference” tournament. He recognized Kyle Wolvington as an all-conference golfer and Lane Hoover as a conference champion.

Sanders recognized the state champion 3,200-meter relay team of Porter Nichols, Dalton Nixon, Ben Cornia and Kaleb Mayes that won the title Thursday while running in a blizzard with slush on the track, 400-meter dash state champion and school record-setting Nichols, the school record-setting 1,600-meter relay team of Mayes, Nixon, Will Lillard and Nichols and junior pole vaulter Brent Snyder, who cleared 13-6 as the regional champion and placed second at State.