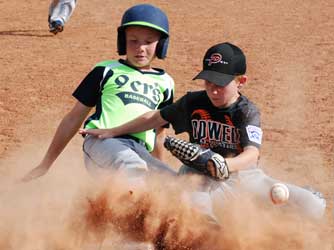 The Big Horn County 10U and 12U all-star squads put on some strong performances over the weekend in Riverton, Powell and Billings.

The Big Horn County Major League All-Star Team clobbered the Billings Black Sox 22-0 in game one of a doubleheader Sunday in Billings.

William Spann rapped four hits in game one to lead the team, and Colby Henderson and Carlos Rodriguez had three apiece.

Satchel Ginest led the team with three RBIs, and Cade Cooper and Rodriguez had two apiece.

Rodriguez also led the team with four RBIs, and Boettcher and Henderson had two apiece.

Members of this year’s Major League All-Star Team are: from the Indians, Joel Padilla, Jared

Ryan Mangus is the manager for the 12U team. Kelly Spann and Ken Wright are the coaches.

The Big Horn County 10U All-Star Team fell to Rock Springs 7-4 Friday in a pre-district tournament in Riverton.

Danika Crumrine and Joaquin Scheeler recorded one hit apiece for the Niners. Crumrine, Alex Hedges and Mason Moss each had an RBI.

Next, the Niners fell to host team Riverton 9-8 in extra innings.

Scheeler and Hedges rapped two hits apiece for the Niners, and Kyle Wilson and Hedges recorded an RBI each.

Saturday, the Niners bounced back from Friday’s losses and defeated Riverton 16-5. Tucker Jackson and Hedges rapped three hits apiece for the Niners, and Crosby had two.

Wednesday, the Niners faced Cody in one six-inning game in Cody.

Members of this year’s Minor League All-Star team are: from the Braves, Owen Walker, Matthew Newman and Alex Hedges; from the Dodgers, Matthew Crosby and Rudy Hall; from the Cubs, Tucker Jackson, Kyle Wilson, Danika Crumrine and Mason Moss; from the Twins, Cash Wassmer and William Watts; and from the Red Sox, Lafe Files and Hudson May.

Greg Rael is the manager for the 10U team. Nick Wilson and Stan Hedges are the coaches.

Sunday, the Major League All-Stars will be on the road to face Buffalo at noon and Sheridan at 2 p.m. in Buffalo.

Wednesday, July 19, the Minors and Majors all-star squads will begin Wyoming District 1 Tournament play, both facing Bridger Valley in Green River. The Minors will play at 4 p.m. and the Majors will play at 7:30 p.m.