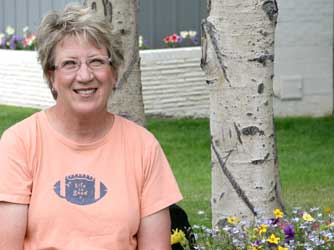 Teacher Linda Morrison retired at the end of the school year after more than 30 years of turning on young minds in Big Horn County School District No. 2. Morrison served the students at Lovell Elementary School for most of her teaching career, except for one year teaching in Cowley and several years she took off to raise her children. Morrison earned her early childhood education degree at Brigham Young University in 1975.

As a beginning teacher, Morrison landed her first job in the educational field as a teaching assistant at LES, after moving to the area with her husband Bruce. That job later led to teaching at various grade levels, before she settled in as a first-grade teacher for 17 years, where she said she loved every minute of the experience.

“The thing about this grade level is that they come in with a knowledge base and just grasp so much more in that year,” said Morrison. “They are so excited about everything. They are the best.”

Morrison specialized in teaching reading and was trained as a “reading recovery” teacher early in her career. She said she was honored to be part of the program, which she feels is very important in the district.

“The reading recovery program is a method of teaching struggling readers the methods that good readers use,” explained Morrison, adding that it has continued to be an important part of the school’s curriculum for about 20 years. “One of the reasons it has been so successful here is that we got on board with it and stayed with it. I think it really has made a huge difference in our district over those years.”

Morrison said one of the most rewarding moments of her career was when she received a handwritten note from one of her students that read, “Thank you for helping me learn.”

“It just doesn’t get any better than that,” said Morrison. “That’s a pretty incredible thing for a first-grader to do.”

Morrison is fondly remembered by many former students for her introduction of the fictional character Tigger in her classroom. She described herself as “kind of a theme person” and employed the character from the classic Winnie-the-Pooh story to create an atmosphere that was fun, comfortable and conducive to learning.

She said Tigger was a logical choice because she had grown up with a Tiger mascot in her high school in Idaho Falls and at one point even was the mascot.

“In high school, we were the Tigers and I was the mascot,” she explained. “That had been my goal all my life to be the mascot, so when I got that opportunity it was special to me.

“When Tigger came out later (and popularized by Disney movies), it just made sense that he would be my guy in the classroom. The 100-acre woods and all those characters were just good friends and that’s how I wanted my classroom to be – a friendly place, a place where kids could be happy and they could bloom and have success.”

Over the years Morrison received many stuffed Tiggers as gifts. She even donned a Tigger costume at the school’s Halloween celebration for many years.

“It took me two years to give all of my (stuffed) Tiggers away. I literally gave a Tigger to every one of my kids for two years,” she said.

Morrison said she wore her Tigger costume for years and was unable to change to something else because everyone asked her to wear the costume again. She still owns the costume.

As with most retiring teachers, early summer is too early to miss the classroom, though she imagines it will be a little strange not to go back when school begins in August.

“You realize when its time and when I turned 65 I knew it was time,” said Morrison. “I have lots of interests that will keep me busy and it just seems like the right time to do that.”

Morrison said she plans to travel and spend more time with family.