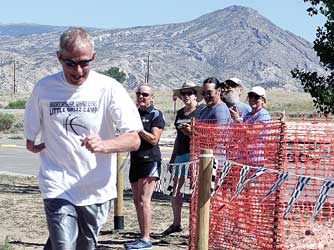 Those of us on the sidelines are often baffled by what motivates triathletes to plunge into chilly waters at 7:30 a.m., bike along a hilly course and run along a high desert trail like they did this past weekend at Horseshoe Bend.

Seventy-year-old Roland Simmons of Cowley summed it up best with the simple statement, “Because I can.”

Simmons has competed in the race all but two years since its inception eight years ago. Though born with a congenital defect that allows him to swim with the power of only one arm, Simmons completes every leg of the race with a broad smile year after year. He said it not only gives him a reason to stay in shape, which he does by getting up at 4:30 a.m. three days a week to train at the local pool, but also affords the opportunity to inspire others, noting that the training makes him feel like “a million bucks.”

Organizer Ben Zeller, an athlete now in his 30s, shared a similar motivation of training to stay in shape, adding that he just likes being outdoors.

“I love that feeling of only hearing the sound of my own breath,” he said. “It’s very peaceful.”

Zeller said he was inspired to take up the sport eight years ago at age 28 by his friend Miranda Shelton of North Carolina. Though he’d been athletic much of his life, he was intrigued by the idea of competing in a multisport activity that gave him the opportunity to compete against himself while maintaining a good fitness level.

With some encouragement by Shelton, Zeller, a self-described “adrenalin junkie,” competed in his first few races and found himself hooked on the sport. In order to introduce other local athletes to the sport, Zeller, with a little encouragement from Shelton, was the mastermind behind the Big Horn Canyon race. He said he enjoys the friendly atmosphere of most races, the travel that is often involved and meeting new friends.

Nine-year-old Melissa Merritt and her older brother Daniel said they were inspired by their parents Ladell and Jeanna, who they’ve seen train and race over many years. They said the family enjoys training together on occasion at the local swimming pool or on family bike trips. Melissa competed for the first time this year on the family’s youth team and said it wasn’t as hard as she expected it to be. Daniel, who inherited a competitive spirit from his parents, said he hopes for more competition in the future. It was his second time competing in the race.

“If there’s someone to race against, I do my best,” said Daniel, who is active in sports at his school. “I try harder to win.”

Beth Bischoff, who took on the bike leg of the race representing Team Whistle Pig, said, though her job with the U.S. Forest Service keeps her in fairly good physical shape, she enjoys working out on a regular basis. This was her first-time racing on a team at the Big Horn Canyon event and she said she really enjoyed the camaraderie.

“I’d definitely do this again,” said Bischoff. “It’s a fun thing to do with friends.”

Angie Spann, who took on the swim leg of the race for Team Whistle Pig, shared a similar sentiment, adding that she also enjoyed the friendly atmosphere and fun activity with friends.

“This type of race is very low stress,” she said. “Most everyone is just trying to do their best. It’s a very friendly and supportive atmosphere in that way. Let’s face it, no one here is trying to make the Olympics or anything like that.”

Pat Steed, the runner on Team Whistle Pig, said he feels better when he’s in shape and competing on the team motivated him to be in ever better shape in order to represent his team well.

The race is held every year in the Big Horn Canyon, in most recent years alternating between Horseshoe Bend and Barry’s Landing. Though normally held in July, organizers are considering switching the race date to August, when the water is a bit warmer.