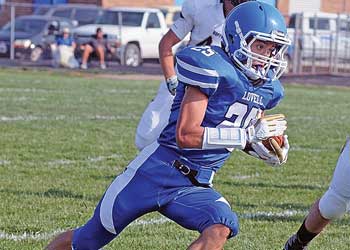 The Lovell Bulldogs dusted off the cobwebs, worked out some kinks and learned a lot about themselves as they took on the Class 3A Buffalo Bison in a “week zero” game at Robertson Stadium Saturday afternoon.

Buffalo won the varsity portion of the game 28-0, then tacked on another touchdown during the freshman/sophomore “fifth quarter” for a 34-0 final score.

There are 45 players on the Lovell roster — 12 seniors, 12 juniors, eight sophomores and 13 freshmen — although two players are already lost for the season: junior Jacob Grant with a knee injury and sophomore Thomas Hinckley with a femur fracture.

Coach Doug Hazen said the Bison were a tough opponent, but a valuable one, for a week zero practice game.

“Their numbers aren’t much greater than ours. I think they have 48 out for their team,” Hazen said. “But it’s just different. 3A is a different level of competition. Player in and player out, they have more consistency.”

Hazen said the game was an eyeopener for players seeing their first varsity action and also gave coaches valuable information about positions.

“This was the first game where we got to play against anyone but ourselves,” he said. “You go 2½ weeks, and prior to this point you haven’t moved kids around. It becomes much clearer. Some kids are solidified at certain spots, and other kids may realize they’ll play if they move to another position. Some kids will have to learn multiple positions.”

Hazen said many of the players had to adjust to the speed of the game at the varsity level, noting that the Bulldogs generally played well on defense but let some Bison players get outside for huge gains.

“The speed of the game at the varsity level is fast,” Hazen said. “These guys got outside and were gone.”

The Bulldogs failed to score and struggled on offense, the coach said.

“I was disappointed offensively,” he said. “We put the ball on the ground way too much. We dropped snaps, and the quarterback-center exchange was not good.

“It was frustrating at times. We wasted plays, and that bothers me a lot. We did that far too many times. At this point we should be able handle the quarterback-center exchange and the shotgun snap. Turnovers are the fastest way to lose a game.”

As is usually the case in football, the defense is ahead of the offense in the early season.

“We played a superior offense than we’ll usually see in 2A,” he said. “There are some things we did well. We blitzed effectively and had three or four sacks. We almost had an interception/fumble recovery for a touchdown.

Hazen said some positions are fairly set, but others have multiple options coaches must decide upon.

On offense, senior Logan Hitz will get the starting nod at quarterback to start the season, with junior Mat Savage backing him up. Senior halfback Porter Nichols and sophomore fullback Coy Trainor will start in the backfield, with junior Mikel May and senior Antonio Garza seeing some snaps, along with junior Trysten Wilson.

Hitz will throw to senior receivers Dalton Nixon and Will Lillard, along with Savage, juniors Kaleb Snyder and Jack Steed and sophomores Hunter Harris and Quinton Hecker.

On the line, there has been some shifting around, Hazen said, but as of Monday the line was shaping up to be 250-pound junior Kurt McNabb at center, seniors Ben Bates (285) and Dylan Hereth (240) at the guards and senior Trevan Lewis (230) and junior Kerry Powell (195) at the tackles, with senior Frank Minchow (245) and junior Kelly Powell (205) working in, along with senior Tanner Brinklow (205).

Hereth and McNabb will anchor Hazen’s 4-2-5 defense at tackle, backed by Minchow, Trainor and junior Daniel Luna (230). The Powell twins will line up at end, backed by Lewis and Brinklow. Bates and Nichols will headhunt at middle linebacker, along with May, but “someone could bounce outside,” Hazen said. Also working at linebacker is Nunn.

The Bulldogs will host 2A East foe Newcastle in their regular season opener Friday at 6 p.m. The Dogies smashed Custer, S.D., 42-0 in their week zero game Friday and will provide a stiff challenge, Hazen said.

“They’re going to test us,” he said. “Their formations on offense are atypical. They use unbalanced formations and will test us as far as discipline goes. They’ll run, run, run, then throw behind you, though they want to run the ball first.

“It’ll be a big test out of the gate for us. I don’t think I’ve game-planned for those formations. It’s kind of a hybrid offense. They bring everybody to the point of attack. It’ll be a physical game. If we can match their physicality, it will be a good game.”