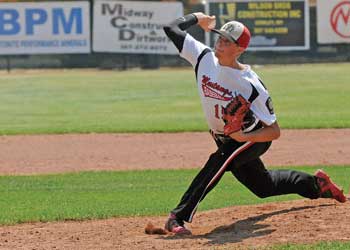 The Lovell Mustangs received great recognition this week as three players were named to the Wyoming American Legion Class A All-State Baseball Team including the Class A Pitcher of the Year.

When the list was released Monday following the state tournament that wrapped up in Cowley Sunday, the Mustangs commanded one-quarter of the 12-member team. Only state champion Cody matched the Mustangs with three selections.

Jeremy Schneider of Lovell was named the Class A Pitcher of the Year and was also a first team all-state pick.

“I’m really proud,” Mustangs manager Mike Jameson said. “It’s exciting when guys get the recognition they deserve, especially Jeremy as pitcher of the year, Riley named a two-time first team player and Dawson first team after second team last year. That shows the type of year they had and the respect they got from coaches around the state.”

Forcella led the Mustangs with a .441 batting average, and he had 10 doubles, seven triples and two home runs among his 60 hits, finishing with a .662 slugging percentage. He drove in 31 runs and scored 42. He was also a standout defensive catcher, gunning down many would-be base stealers.

“Dawson is, if not the top catcher, right up there with the top catchers in the state,” Jameson said, noting that Forcella will move on to play baseball for the Minot State University Beavers.

Schneider was dominant both on the mound and at the plate. He recorded a 5-3 record to lead the team in wins and allowed 32 hits and just 17 earned runs in 49 2/3 innings of work. He fanned 75 batters and had a 2.40 earned run average.

“Those three hitters were definitely a big 1-2-3 punch in our lineup,” Jameson said.

Dickerson was the team’s starting second-baseman and a relief pitcher. He led the team with a .977 fielding percentage, committing just three errors in 132 total chances. He went 3-5 on the mound, walking just 13 batters in 38 2/3 innings while striking out 22. At the plate he had a .434 on-base percentage and scored 21 runs.

“Defensively, Trey was very solid and did a great job for us,” Jameson said. “He was effective on the mount eating up innings.”

Outfielder Wyatt Horrocks hit .275 with four doubles, two triples and 22 runs batted in. As he gained confidence and experience, he began to hit the ball hard later in the season.

“Wyatt has improved each year,” Jameson said. “He has taken great strides to be a pretty solid hitter for us.”

“There are people with a lot of excitement at all levels,” he said. “Baseball is in a really good place right now.

“I’d like to thank everybody – the donors who covered the gate fee, the field crew, the parents and the fans who came out and supported us, the concession stand crew and especially Ray (Peterson), who gives hours and hours to the program. The program wouldn’t be where it is without him.

“Everybody mentioned how well the state tournament went.”