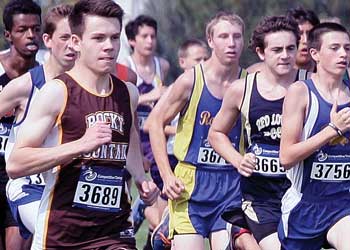 The Rocky Mountain Grizzlies overcame the smoke, the heat and the nerves that come with a big race to turn in some strong performances at the Billings Invitational Friday at Amend Park in Billings.

“It was a huge race,” coach John Bernhisel said. “I’m sure it’s the biggest high school race I’ve ever been involved in.”

Asked if the smoke from regional forest fires was an issue, Bernhisel replied, “I don’t think so. It wasn’t a factor. The heat was the biggest factor. I saw 92 degrees right after the race. It was the first meet of the season, and kids are always struggling over the last mile anyway. Having intense heat added a layer of difficulty.”

The standout for the Grizz was junior Skyler Drewes, who blazed the 5K course in 19:02 to place third out of the 269. His time was more than a minute faster than his time from a year ago, even though the course has been expanded to a full 5K, or 3.1 miles, from the even three miles harriers ran in previous years.

“Skyler ran a phenomenal race,” Bernhisel said. “He has improved as much as I’ve seen someone improve between his sophomore and junior year. He has a different focus, and I think he’s motivated by being the team leader. Anyone racing with more than 250 humans and placing in the top five is incredible.

“He’s focused. It’s all focus. He works hard in every practice and pushes himself.”

“I’m excited to have three runners under 20 minutes for a full 5K in the first meet of the season,” Bernhisel said. “That’s a great indicator.

“We started the season with hard workouts and had a pretty good summer program, so we were able to hit the ground running.”

Senior Jonathan Allred and sophomore Justin Dausman missed the meet to nurse injuries, but junior Dominic Estes finished 138th with a time of 22:43. Isaac Baird ran 26:58, 2½ minutes faster than his time of a year ago, Alecx Christensen 27:56, Bryan Jurado 29:32 and Austin Ballard 30:00.

“It was Dominic’s first meet ever, and for him to run 22 minutes got me excited about how he can help the team,” Bernhisel said.

The Grizzlies placed ninth out of 20 full teams in the junior varsity division, and 12 other schools fielded partial teams.

The highlight of the Lady Grizzlies’ day was the performance of freshman Devin Gilmore, who placed 14th out of 210 runners with a time of 23:49.

“Her dad, Ricky, was an all-state runner for me, and to run in the 23s on a 5K course is outstanding,” Bernhisel said. “She really has some potential. Five of our six girls were running cross country for the first time. A lot of times in a meet of this size the competition and the heat makes it tough.

“I’m pleased to have a solid team. We’re just going to keep working.”

The Lady Grizz placed 11th out of 17 teams in the JV division, and 11 other schools competed with partial teams.

The Grizzlies are off this weekend except for a two-mile intrasquad time trial today (Thursday). The team is scheduled to compete in Lander Sept. 14 and at the NSI meet in Sheridan Sept. 16 before hosting the Rocky Mountain Invitational on Monday, Sept. 18, at Foster Gulch.