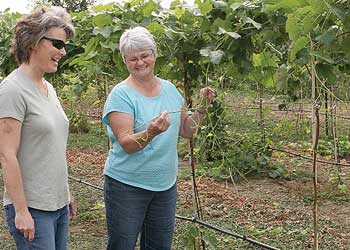 Nancey and Larry Blair went from crunching numbers and computer programming in Seattle to the careful handwork of tending a small vineyard when they moved onto their 18-acre property in the countryside near Cowley. And they are enjoying every moment of the lifestyle change.

The couple has family in nearby Powell and in Brodus, Mont., so it made sense when they decided to purchase property in the beautiful location on Cannery Road outside of Cowley. They were joined earlier this year by their daughter Nicolle Laffin, her husband Dan and two young children. Each family has built a home on the land, making Mustang Mountain Vineyards a true family operation.

The property had been an apple orchard more than 50 years ago, and the Blair’s gave serious consideration to replanting apple trees but changed their plan after observing a grape growing operation in eastern Washington.

“We were thinking of revitalizing the apple orchard until Nancey went over to an accounting conference in Yakima, Wash., and went on a tour of the vineyards there,” said Larry.

Coincidentally, the property Nancey had the opportunity to tour had once been an apple orchard that had been converted to a vineyard. The premiere vineyard also offered growing seminars, which the couple took advantage of as they prepared to cultivate their own growing operation on their land outside of Cowley.

“We drove over there (to Yakima) for seminars several weekends,” said Larry. “I wish I could remember everything they said. It was a lot of information.”

Living in the country was not a completely new experience for the Blairs. Nancey grew up in Newcastle, Wyo., and Larry grew up in Hot Springs, S.D. Though Nancey, to a certain extent, misses the hustle and bustle of the city, Larry said he has adapted to the sparsely populated, relatively quiet pace of country living.

“Living in the country is not totally new to us, we both grew up in small towns,” said Nancey. “We just wanted to be close to family and this looked like a nice location.”

The challenge of growing grapes is a new experience for them both. They planted 500 vines of two winter hardy varieties of grapes created at the University of Minnesota specifically cultivated to withstand cold winters down to 25 and 30 degrees below zero. As is typical with grape vines, it took about four years to produce a crop that was marketable.

“These are hybrids designed for cold weather,” explained Nancey.

The vineyard’s first crop harvested in 2014 produced about 1,800 pounds of grapes. Though each subsequent year has been different, they’ve found moderate success and improvement in both quality and yield each year, though not without some winterkill.

Though the varieties they grow are ultimately used to make wine, Nancey said the Blairs have no intention of becoming vintners. She said they think of themselves as farmers, albeit an unusual crop for Wyoming, and currently sell their entire crop each year to only one client, the Tongue River Winery in Miles City, Mont.

Nancey said, though there are a few other relatively small vineyards (mostly in the southern part of the state), it is a tricky crop to find success with. As a former payroll accountant for more than 20 years, she relishes the challenge of intricately planning around the weather, of scientifically monitoring the soil and carefully metering out the water through a drip irrigation system. Most of all, she loves the meticulous handwork required and working in the backdrop of the Pryor Mountains, even more so now that her daughter Nicolle has taken to the task and works alongside her.

“My daughter loves working in the field and has been a great help,” said Nancey.

From hand mulching each vine to protect its roots in the winter to careful pruning in the late spring, the year-round battling of the winds and fighting off grasshoppers and birds in the summer, Nancey said the mother/daughter/father and occasionally son-in-law team enjoy every moment of their new vocation, though it’s a bit more challenging than anticipated.

“It’s definitely a full-time job,” Nancey said. “It’s a lot of hand work and a lot of manual labor. It takes a lot of time and we do it all ourselves.”

The grapes, which are about the size of a pea, are harvested in mid-September by hand using a special tool to avoid damage to the vine. They are then carefully loaded loosely in boxes to prevent crushing, before being hauled off to their client in Montana. During the summer, the vines require continuous care from “cluster pruning” and removing suckers to create quality over quantity.

Nancey and Larry did all of the work themselves, until their daughter Nicolle and family moved onto the property to help with the small family operation. She said working in the peaceful setting with other family members has truly added an enjoyable dimension to the experience. Though challenges have become fairly routine, she said she enjoys the experience more than ever.

Nicolle, formerly a math teacher, especially took to the work and toils alongside her mother meticulously tending the vines. Larry carefully plans and maintains the drip watering system, cleaning its filters on a daily basis, along with a full complement of other tasks. Son-in-law Dan helps, as time permits, in his free time away from his full-time job as Lovell Police Chief. And the kids, well, they just have fun being kids, exploring and enjoying all the adventures country living has to offer.