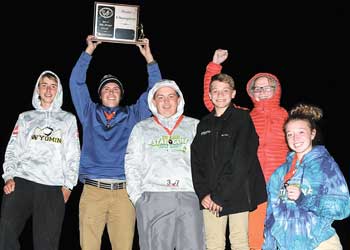 It’s time to hoist another banner. For the first time in 12 years, the Lovell Bulldogs golf team is king of the links as the Bulldogs shocked the Class 2A division by winning the 2A boys state title at the State Golf Tournament Monday and Tuesday at Kendrick Golf Course in Sheridan.

It is Lovell’s first boys team title since 2004 and 2005 when Lovell won it back-to-back. The Bulldogs beat Lusk both years, winning by 29 strokes in 2004 and by 81 strokes in 2005. Luke Harrison and Tim Schmidt finished first and second both years.

“Everyone asks me if it was a surprise. My reply is emphatically yes,” coach Craig Lundberg said. “If you asked me two or three weeks ago if we’d be state champs, I probably would have laughed it off. I knew there was a chance that, if we all played well, we could do it. On paper it didn’t look like we could push through, but we had some guys step up.”

When asked if competing against 3A and 4A schools this season helped out any, Lundberg replied, “The better competition you surround yourself with, the better you perform. It’s always good to compete against bigger schools.”

The Bulldogs came out of the gate strong on day one with a team total of 389, and shot a day two score of 416 for a team best total of 805, six strokes ahead of Kemmerer with 811. Tongue River was just a stroke behind Kemmerer for third at 812 and in fourth was Moorcroft with 816.

Lundberg said Kemmerer was highly favored to win the state title this year.

“They were favored to win the whole thing,” Lundberg said. “They were the team to beat on paper.”

In Individual results, sophomore Brenen Hinckley was trailing Moorcroft’s Caleb Connally by two strokes with an 85 after day one, then shot a 96 on day two for a two-day total of 181 to place second at State as Connally collapsed with a 107. Hinckley earned all-state honors.

“We really came in and surprised some people on day one, especially Brenen,” Lundberg said. “He comes in and shoots an 85 the first day.

“We knew he was capable of shooting that low, from what he’s done at practice, but it had never translated to a tournament. He comes in and shoots an 85 on the first day when his average was a 102 for the season. So he’s 17 strokes better than his season average.”

Lundberg talked about the playoff with Hinckley and Jaren Fritz of Tongue River.

“The first hole was kind of a heartbreaker. Both golfers had really nice drives. Brenen’s second shot lands right in front of the green. He has a nice chip and lines his putt up perfect. It goes halfway down and pops out. I was about to give the Tiger Woods fist pump. It was perfect.”

Hinckley tapped in and Fritz was able to capitalize and tie the score, then won the tournament on the second hole when Hinckley’s wedge shot was affected by the wet grounds, leaving him with a tough downhill putt.

Senior Kyle Wolvington was right behind Hinckley with a day one score of 87, then shot a 95 on day two for a two-day score of 182 to place third at State. Wolvington earned all-state honors for the second straight year.

“Kyle comes in that first day with an 87,” Lundberg said. “You couldn’t ask for more. The weather was perfect. Tuesday was the polar opposite of Monday. It was rainy, windy and cold. I was proud of the kids for fighting through those conditions.”

Lundberg talked about Wolvington’s finish at the tournament.

“Kyle was in the same group as Fritz all day.” Lundberg replied. “We knew he was golfing pretty well. It came down to hole nine. Kyle had the lead. He smokes his drive right down the middle of the fairway. The wind was kind of blowing so he had to aim his next shot right. It goes out of bounds by about five feet.

“On another course that’s not going to be out of bounds. He had to hit again from the same spot and this time hit right up on the green. Fritz ends up beating him by one stroke.”

Lundberg said that Wolvington and Hinckley set the tone for the two-day tournament.

Senior Trey Dickerson was the third strong finisher for Lovell on day one with a score of 105 and he shot a 106 on day two for a tournament score of 211 to finish 18th at the state tournament.

“He shot a solid score,” Lundberg said. “I know he wished he would have golfed the way he had earlier, but he was very consistent from day one to day two.”

Freshman Zeke Newman ended up as the fourth finisher for Lovell in the tournament by shooting a 112 the first day and a 119 the second day for a score of 231 to place 27th.

“Zeke Newman coming through with a 112 was big,” Lundberg said. “I knew we had three good golfers, but you’ve got to have a fourth guy who can come in and be pretty solid.”

Sophomore Kirk Thomas finished the tournament shooting a 126 the first day and a 129 the second day for a two-day total of 255 to finish 34th.

“Kirk actually made the state tournament team on our playoff rounds in Lovell. He shot a 96,” Lundberg said. “He averages about a 122. He was pretty close to that both days. While we didn’t use Kirk’s scores for our team score, he played all summer long and you could see the improvement. He’s getting there, and I love how he’s sticking it out.”

Lovell’s lone female golfer, freshman Adessa Lundberg, finished day one of the tournament in 10th place with a score of 117. She came back the second day with a 111 for a tournament score of 228 to finish ninth in the girls division. Lundberg also earned all-state honors.

“I’m pretty proud of her,” Lundberg said. “She’s come a long way in a short time and was able to garner all-state honors and get the medal. It’s kind of funny. Before the season started she’d never played more than three or four holes at a time. Once she finally got into it she took off and became more and more consistent as the season went on. I was excited to see her achieve that.”

Lundberg hopes that the success Adessa had might attract more girls to join and form a girl’s team.

“There are always some girls who are on the bubble of being able to compete at a high level in other sports,” Lundberg said. “A lot of them don’t think about golf. With Adessa having such success as a freshman it should get them to think about participating in golf and realize it’s something they can be successful at.

“Even boys may think, ‘Hmm. Maybe I can be a part of that.’ Not everybody can say they’re a state champion, and these five boys can. There’s going to be a banner in the gym and a trophy in the trophy case.”

When asked how this state championship might affect the future of the golf program, Lundberg replied, “Any time you can go out and win a state championship it gets people’s attention. It was great to see everybody support us on Main Street and through social media. Makes people say, ‘Hey, we’ve got a golf program and it’s pretty good.’

“It was awesome. I’m proud of the kids because our kids have never been in this situation this season. They never shot below 400 all year. To see them be resilient, play through the poor weather and pull it out is something as a coach you’ll always remember. Golf is the most challenging mental game I’ve ever played. It’s easy to break down mentally and they never did. They turned it on when we needed it.”

The state golf tournament was the last fall contest for Wolvington, Dickerson and Nathan Beal.

The Bulldog golfers will now look ahead to the spring golf season, opening play when they travel to the Worland Invitational April 6.