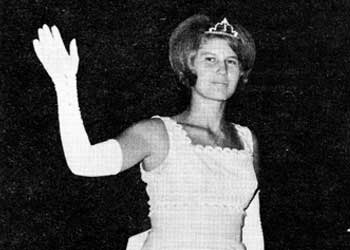 Deputy State Examiner L.L. Williams was checking up on the books of the Cowley town treasurer and town clerk Monday. He said everything was Huckleberry-pie order; that the books were neatly kept and most satisfactory in every way. Mr. Williams was accompanied by his charming wife, the versatile editress of the Deaver Sentinel, who was along to see that L.L. conducted himself to her liking, knowing that our town clerk—treasurer belongs to the gentler sex, and you never can tell, you know.

It has been suggested that as nearly as possible all the men that have been working in the fields should return (after the rain) for the harvest in order to keep the original number of people harvesting beets. Filling stations, grocery stores and dry goods stores can be operated by women and it is expected that women volunteers offering their help in the emergency will be effective in keeping the stores open. The combined efforts of the volunteer beet workers have accounted for a daily increase in tonnage harvested of around 350 tons.

Susan Engelking was crowned Homecoming Queen for 1967 and reigned over Homecoming activities last Thursday and Friday.