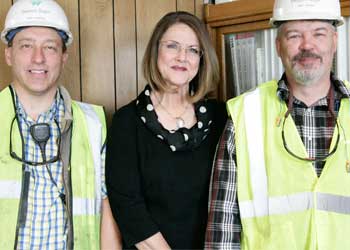 Lovell Inc. and the Western Sugar Cooperative announced this week that the two entities have entered into an agreement to participate in a feasibility study to determine whether waste heat generated from the sugar plant in Lovell during the beet processing campaign can be economically used to heat a greenhouse to grow vegetables year around.

The state-of-the-art greenhouse would be located somewhere near the factory, so that steam and water left over from the processing of beets could be piped directly into the heating system of the greenhouse. Currently, the water is piped into holding ponds near the factory.

The greenhouse would produce vegetables that could be sold locally and beyond. An adjacent production facility could also be used to wash and package produce raised locally by small farmers and even backyard gardeners.

According to Lovell Inc. Director Elaine Harvey, her organization is responsible for raising the funds to conduct the study, which she plans to do through grants. She noted that other types of plants have utilized steam and water in a similar way with success, so she has no doubt it can be done efficiently. A sugar processing plant in England successfully operates a greenhouse in tandem with its plant.

Harvey said the feasibility study will focus on the profitability of such a venture and how the business would be structured. Harvey said she has already spoken to some potential investors and looks forward to the study, which will determine the most economical way to set up the business.

As director of Lovell Inc. Harvey is always on the lookout for potential new businesses that will bring jobs to the community. It is estimated that the greenhouse could bring as many as 25 “good paying” jobs to the community, as well as contributing to the economy of the town and adjacent communities.

Harvey shared the idea earlier this week with State Treasurer Mark Gordon, who was visiting the area, and she said he was very supportive of the idea. Gordon is also a member of the State Loan Investment Board (SLIB) that administers Wyoming Business Council grants and loans.

The greenhouse, which is a proprietary idea of Lovell, Inc., would encompass three acres of growing space. Hydroponic methods would be utilized to maximize its productivity. Harvey said, in addition to a separate “production” building where items could be processed for market, she envisions another separate building that would house a lunchroom and restrooms for employees and added that she would like to see the building designed to accommodate handicapped employees, as well.

The greenhouse fits well into a “food hub” plan for the area that is being developed by Vista volunteer Nancy Kastning, who is working under the direction of Lovell, Inc. to connect local small farmers with the general community, schools and senior programs to market their products locally.

Both Kastning and Harvey emphasized that neither program is intended to compete with local farmers. Kastning said her goal is to create “sovereignty” in the Big Horn Basin that would develop “food security” by producing everything needed locally. She noted that some of the food could be distributed to those in need through local food banks.

Kastning said one advantage of the greenhouse is that it can be built in a way that keeps insects and weeds out of the growing area, reducing the need for both pesticides and herbicides. She said she imagined items not easily stored long term like greens and herbs in large enough quantity to feed people in the area, as well as to export out of the area. She said, since the cost of using the steam is far less than other heating methods, the greenhouse would make it possible to produce all year in an area with winter weather that would normally prohibit year-around growing.