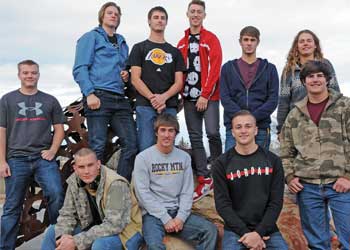 After a successful season that saw them finish second in the Class 1A West, the Rocky Mountain Grizzlies had 11 players selected for the 1A West All-Conference squad, three of whom were also named to the 1A All-State team.

Seniors Wyatt Horrocks, Tristan Jewell and Lathan May were named all-state and were joined on the first team all-conference team by seniors Treyson Frost and Carson May and by juniors Kyle Hoyt and Ethan Price.

“Wyatt controlled the middle of the field for us on both sides of the ball,” coach Richard Despain said. “His work ethic is second to none. He’s a quiet kid, but he always gave us everything he had. He ran traps well, and we also threw screens to him quite a bit. He blocked very well, and he also picked up guys on pass plays – blitzing linebackers and stunting linemen.

“On defense he controlled the middle of the field. His main job was stopping the run and he was always there.”

Horrocks carried the ball 16 times for 41 yards and a touchdown and caught five passes for 49 yards. He finished fourth on the team with 85 defensive points including 41 assisted tackles, 19 solo tackles and two tackles for a loss.

Jewell was a versatile athlete for the Grizzlies who ran the ball, caught the ball and threw the ball from his flanker position. He was also a ball-hawking safety on defense.

“He was a receiver as often as he was a running back,” Despain said.

The Grizz finished second in the state in team passing behind only Big Horn, “and Tristan was a  big part of that – he and Lathan,” Despain noted. “He did the underneath routes and was not afraid to take a hit. He received votes for both offensive and defensive player of the year in the conference and was a threat on both sides of the ball. He has speed and great hands.”

Jewell carried the ball 25 times for 204 yards and one touchdown, averaging 8.2 yards per carry, and he caught 17 passes for 300 yards, averaging 17.6 yards per catch. He also completed seven of eight passes for 50 yards. On defense he led the Grizzlies with 165 defensive points, recording 50 assisted tackles, 38 solo tackles, five interceptions, two pass breakups and two fumble recoveries.

“From his safety spot, teams didn’t throw over the middle much, so he would have to make quick reads,” Despain said. “They knew where he was. He had great speed and could close and get those (interceptions).”

May was a playmaking wide receiver and cornerback for the Grizzlies, catching 16 passes for 358 yards and four touchdowns. He averaged 22.4 yards per catch. He also carried the ball five times for 38 yards on wide receiver sweeps, averaging 7.6 yards per carry. On special teams, he returned six punts for 133 yards, averaging 22.2 yards per return, tops in the state for Class 1A.

On defense, May intercepted four passes and recorded 32 tackles in the defensive backfield.

“He had great size, great speed and great hands,” Despain said. “The 50-50 balls were his. He’d go get ‘em. At cornerback he got better and better as the year went on. He got more and more comfortable. He had two interceptions and a forced fumble in the Wright game (last regular season game). He had speed to close. He’s quiet but is a competitor.”

Senior Treyson Frost was another versatile offensive threat for the Grizz, leading the team in rushing with 227 yards on 71 attempts and four touchdowns. He completed both of his halfback passes for 99 yards and one touchdown, an average of 49.5 yards per completion. He also caught 18 passes out of the backfield for 128 yards.

As an outside linebacker he finished third on the team with 94 defensive points including 55 tackles and seven tackles for a loss.

“Treyson was one of our four team captains (with Horrocks, Jewell and May), and he gave you everything he had, every game,” Despain said. “He just played his heart out all the time. He was a natural leader the team gravitated to  on and off the field. He’s a hardworking kid.

“As a linebacker he was solid, one of the kids you could count on to do his job.”

Senior Carson May was a cornerback and wide receiver who “had some big catches for us,” Despain said. And besides that, the coach said, May had “a knack for getting interfered with,” adding, “He probably gained 100 yards this season on guys hitting him early. He was in the right place, and that’s something that doesn’t show up on the stat sheet.

“He came up well in run support. He was a solid, experienced kid back there.”

As a junior, Hoyt was a strong lineman who started at offensive tackle and defensive end.

“As a strong side tackle he was fast and quick,” Despain said. “We could pull him and he’d get across and up-field as well as anybody on the team. We ask our defensive ends to contain the outside. He was solid and did his job well. It’d kind of a thankless job. Teams remembered him. He received votes for conference offensive lineman of the year.”

Hoyt finished the year with 43 tackles and five tackles for a loss, plus a fumble recovery and a blocked kick.

Junior Ethan Price was a talented quarterback and outside linebacker. He completed 56 of 126 passes for 886 yards and seven touchdowns, with 10 interceptions, averaging 15.8 yards per completion and 126.6 yards per game, third in the state. He also carried the ball 59 times for 221 yards and four touchdowns, averaging 3.7 yards per carry.

On defense, Price was second on the team with 114 defensive points, finishing with 42 assisted tackles and 26 solo tackles. He also had two tackles for a loss, two pass breakups, one fumble recovery and an interception.

“Ethan had a great year,” Despain said. “His knee hampered him a little bit, but when he was healthy he was a real threat to run it or throw it. His healthiest game was Saratoga, and he threw two touchdown passes, ran in two and had an interception and a forced fumble. That’s the kind of game he could have when he was feeling good.

Senior Scott Banks was another versatile player for the Grizzlies, playing wide receiver and tight end on offense and a “robber” outside linebacker on defense.

“He has good hands, and he worked hard,” Despain said. “At tight end he would go up and fight against kids who were almost always bigger than him. As a robber he would sometimes blitz and sometimes play outside contain. He had to do it all, stop the run and play the pass.”

Banks caught five passes for 176 yards and three touchdowns, an average of 35.2 yards per catch. He had 20 tackles and two pass breakups, as well as a tackle for a loss.

Senior Colby Davison started at offensive tackle and played both end and tackle on defense, recording 29 tackles, four tackles for a loss, two fumble recoveries and a pass breakup.

“Colby is a big kid and a tough kid who could really make his presence known when he wanted to,” Despain said. “Toward the end of the year he stepped in and played center. He knew a lot of positions on the field.”

A senior, Austin Grohman started at offensive guard and rotated in on the defensive line, Despain said.

“We ran traps behind him,” the coach said. “In the second half of the season our traps behind him were pretty solid. He was mobile, so when you’d pull him he could get out front pretty well.”

“He didn’t play last year and had a lot of learning to do,” he added. “By the end of the season he was a real important part of the team. He eventually started at tackle and saw a lot of defensive time, as well.”