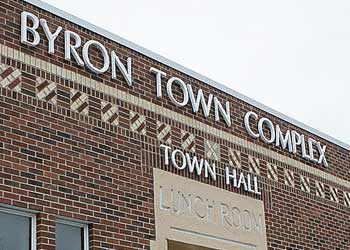 Though Halloween is over, things continue to be downright spooky in Byron, according to some, especially in and around the Town Complex Building. Reports of unexplainable events, like items falling off shelves, lights mysteriously coming on and off, unusual sounds and a general creepy feeling about certain areas of the building have been reported by employees working in the building over the years, but a fairly recent event caught the attention of even the most skeptical observer.

The event was the spontaneous shattering of a glass display cabinet in the museum section of the building that was caught on surveillance video on a Sunday morning in late spring. The video clearly shows the glass shatter with such force that it appears to move items lying on top of the cabinet. One item in particular, a fairly lightweight antique wooden scoop actually rises up and falls back to the cabinet. Two heavier items on top of the cabinet appear to move slightly. Curiously, no one is in the room.

The cause of the event continues to puzzle many, even prompting two visits by a team of paranormal investigators recently. Kristin Belston of Moonlit Horizon is one of those investigators. Belston describes herself as an “empath” or someone particularly sensitive to paranormal activity in the environment. Belston said she experienced a great deal of paranormal activity during her visits to the building, even recording some of the inexplicable sounds that to her sounded like voices.

During one visit, she was accompanied by museum curator Linda NeVille. NeVille said, though she believes in the possibility that there are spirits lingering in the material world, she personally had not any experience that confirmed that belief until she brought Belston to the museum.

“If I wasn’t a believer before, I am now,” said Neville, who witnessed lights turning off and on by themselves and heard what sounded like footsteps during the encounter.

Belston said she felt the presence of spirits in the building, some crying out for help, others issuing warning not to go near certain areas of the building like an elevator or the basement.

Belston said she only investigates noises or unusual events that might be paranormal in nature. She tries to record electronic voice phenomena (EVP) whenever possible. She said her main purpose is to educate, not necessarily to do anything about what she uncovers.

During the recording of the event, Belston said her equipment turned on and off on its own and the batteries of her camera drained. She said she and others attending heard doors slam, witnessed lights going on and off and heard what sounded like whispers and chants in the room.

“Someone kept talking about someone named Kirby in the orange shed,” she said. “A female voice said ‘help me’ several times.”

Belston said she wasn’t sure what the messages meant but they were very pronounced and clear. She said she also felt water running across the floor and was advised later that water does run through a drain under the building. She said she was also warned by a voice about a presence in the basement and was later told by staff at the building that they don’t like to go into that area alone because it gives them a creepy feeling.

“I just document what I feel,” explained Belston. “I don’t give answers.”

Belston said it is her belief that these mysteries are not meant to be explained. She said she was confused at first by the experiences and they worried her from the standpoint of her strong religious beliefs.

“For some reason I feel more OK about this lately,” she said. “I feel less sinful and like I’ve been given the OK to feel this sort of thing.”

Belston presented a report and a DVD of the experience to the Byron Town Council at a recent meeting. She said, though the council as a whole didn’t seem too interested in knowing more, at least one member and many audience members at the meeting expressed an interest in learning more about her revelations.

The potential explanations are vast from scientific to other worldly and though the jury appears to still be out in terms of conclusive evidence regarding the cause of the many unusual experiences, it is almost certain that both skeptics and believers will think about possibilities for some time.