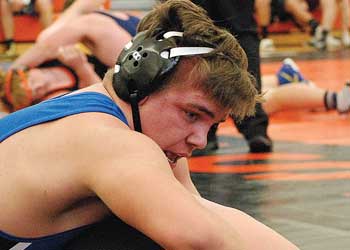 The Lovell High School wrestling squad began the 2017-18 season with a successful showing at the Powell Invitational Friday and Saturday. The team had one second-place finisher, two third-placers, one fifth-place finish and one sixth-place grappler.

“They wrestled well,” assistant coach Skye Mickelson said. “They looked and worked hard. We have some things to work on. The tournament gave us a plateau of what we need to work on in practice.”

Sophomore Coy Trainor took second at heavyweight. After a bye in the quarterfinals, Trainor defeated Shippy from Thunder Basin 5-1 in the semifinals and fell to Smith of Natrona County in 2:33 in the finals.

Sophomore Quinton Hecker placed third at 120 pounds. Hecker defeated Maddox of Powell 8-6 in the quarterfinals and fell to Seameands of Wright 8-6 in the semis. Hecker bounced back and crushed Rogge of Livingston, Mont., 14-2 in the third-place match.

Junior Kelly Powell took third at 220 pounds. Powell stuck Williams of Cody in 3:19 in the quarterfinal round, then fell to Monson of Wright in one minute in his semifinal match. Powell bounced back in the third-place match and beat Johnson of Thunder Basin 7-1.

Freshman Kyler Marchant took fifth at 113 pounds. After falling to Swaney of Powell in his quarterfinal match, Marchant stuck Bolken of Greybull in 50 seconds in the fifth-place match.

Senior Logan Nunn lost his quarterfinal match and his fifth-place match to place sixth at 152 pounds.

Other Bulldog wrestlers that competed at the Powell Invitational were juniors Jack Steed at 145 and Kerry Powell at 195.

The Bulldogs will compete at the Battle of the Big Horns duals tournament this Friday and Saturday in Worland.

“We’re hoping we continue to improve and keep working to get better every week,” Mickelson said. “I was proud of how they did and I’m excited to see how they do the rest of the year.”