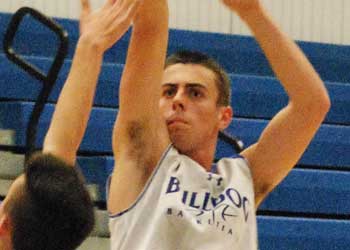 After years of enjoying tall, tall towers, the Lovell Bulldogs find themselves with a shorter but quick lineup as the 2017-18 season begins.

Lost to graduation are twin towers Trace Murphey and Kaleb Mayes, one year after the departure of Nic Haskell, along with starters Riley Abraham and Brandon Teter, plus strong players Reece May and Tyler Teter.

The loss of six seniors, including four starters, will make duplicating last year’s 21-6 record a challenge, but the cupboard is not bare for coach Craig Lundberg.

“Our quickness is going to be a strength for us,” Lundberg said. “We have some pretty decent ball-handlers, which we’ve been blessed with in the last couple of years. And watching our seniors in practice, the familiarity they have with each other is a strength. They play really well together.

“This is the first time since I’ve been the coach that we’ll have to adjust to size. How we play the game will

change. We might run five out (on offense), and we have a four-out, one-in set with more of a pattern type offense that we’ve run in the past.”

On defense, Lundberg said, the Bulldogs will challenge teams with their quick, aggressive players.

“We’ll use our quickness to our advantage and probe teams with pressure and see how they handle it. We’ll front the post, whereas with Trace and Nic we could just play behind and make them (opposing centers) shoot over the top of us. We’ll put pressure on the ball so it won’t be easy to throw into the post. Our base defense will be pretty much the same, our man to man.”

Lundberg has 27 players out for the team: five seniors, six juniors, five sophomores and 11 freshmen. Junior Jacob Grant, who suffered a knee injury early in the football season, will be a manager this year, hoping to return to the court next season.

Starting at the point is the lone returning starter, senior Kyle Wolvington. Asked what he brings to the team, Lundberg replied, “his experience, his work ethic and his toughness. We kind of call him Old Reliable, because he does everything for us.”

Noting that Wolvington is a threat to score, as well as run the team, Lundberg said, “He’s not just a distributor, he’s a contributor.”

Wolvington finished fourth in the 2A Northwest in assists last season at 3.6 assists per contest while averaging only 1.6 turnovers per game. He averaged 7.8 points per game

Moving in at the off-guard position is junior Brenden Lundberg.

“Brenden is another kid who is not super flashy but keeps a level head, plays good defense and makes good decisions, which is something you need out there.”

On the wing is senior Brent Snyder, who was the team’s sixth man and defensive stopper a year ago.

“Defensively, he’s one of those guys you have to have out there who loves to play defense,” Lundberg said. “Offensively, he’s come a long way. His shot has improved, and he can do some things around the rim, too. He plays with confidence, like Kyle.”

Snyder averaged 2.4 steals per game last season, fourth in the 2A Northwest, and 7.4 points per game coming off the bench, shooting 57 percent from the field.

Working inside are seniors Ben Cornia and Jeremy Schneider.

“Ben is long and super springy,” Lundberg said. “He’s a good slasher who is great moving without the ball and finding the open spot. His shot has improved, also, and he’s playing with a lot more confidence this year. He’s going to have a good year, and we need him to.”

As for Schneider, Lundberg noted, “Jeremy is long and lanky, and he’s a pretty good athlete with some spring in him. His mid-range game is pretty tough. He’s good around the basket and is a stretch four or five who can step out to the perimeter and hit shots for us.”

Schneider shot 60 percent from the field in relief of Murphey last season.

Also returning with varsity experience is junior Mat Savage, who is versatile and “can play all of the positions,” Lundberg said, adding, “He’s comfortable down low and is also comfortable shooting his outside shot.”

“We have quite a few kids who’ll get looked at and get a shot. It’s really up in the air as far as the rest of the varsity roster,” Lundberg said.

The Bulldogs will host Tongue River to open the season Saturday at 3 (JV) and 6 p.m. Tongue River is led by Jaren Fritz, who Lundberg called “super tough all the way around, their Mr. Everything.”

Tuesday, the Bulldogs will travel to Powell to meet the Panthers at 4 (JV) and 7 p.m. Lundberg said the Panthers boast size, noting, “This will be the first test where we really have to work on and be diligent on boxing out.”

The Bulldogs will travel to the East-West Classic in Douglas Dec. 15-16.