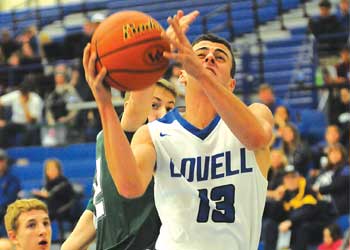 Except for one bad quarter, the Lovell Bulldogs might have gone undefeated at the Douglas Classic over the weekend.

The Bulldogs beat Wheatland 44-28 Friday and Thermopolis 59-42 on Saturday morning, then fell to Torrington 72-48 Saturday afternoon in a game that saw the Bulldogs play almost even with the Trailblazers for three of the four quarters.

In Friday’s game, the Bulldogs came out strong and led Wheatland 20-10 late in the first quarter until a buzzer-beater three-pointer made it 20-13 at the quarter break, coach Craig Lundberg said.

“We knew they had a good post player, and we were worried about their guards who could shoot the three and put the ball on the floor,” he said. “Their guards were pretty smart with the basketball. Defensively, they switched between a zone and man, and we moved the ball extremely well. We made the extra pass and were able to knock down open shots.”

Wheatland outscored Lovell 9-7 in a rather lackluster second quarter to cut the lead to five points at halftime, 27-22.

“That’s kind of been our M.O. We’ll come out like gangbusters, then disappear for a little bit,” Lundberg said. “We’ve got to find a way to remedy that problem.”

The Bulldogs reasserted themselves in the third quarter and outscored “the other Bulldogs” 14-6 to lead 41-28 after three, then added three points in the fourth while shutting out the Wheatland offense to win 44-28.

“In the third quarter we got some really easy buckets in transition and went into a 1-2-2 zone and sat in it and sagged,” Lundberg said. “We went on a run to get up by 18. They worked the ball around and we took away their passes into the high post and looks to the short corner.”

Lundberg said Wheatland struggled against the zone and seemed content to pass the ball around, though down by double digits in the fourth.

“The boys said it felt like they (Wheatland) had the ball the whole quarter,” he said. “It kind  of lulled our boys to sleep, too.”

Lovell powered past the Thermopolis Bobcats 59-42 and coaches were able to play the entire varsity squad, Lundberg said.

“We got up 17-7, and I subbed liberally through the game,” he said. “Everyone got in. Everyone got to play. Thermop played man-to-man the entire game, and we were able to get good looks at the basket. It was kind of sloppy, but it was good to see lots of kids get playing time.

“Their point guard, Hudson Roling, was able to get into the paint and get some easy looks. We’ll work on our rotation and make sure we get help sooner.”

Lundberg said the Bobcats were playing without one of their top players, Noah Schwalbe.

The Bulldogs battled Class 3A third-ranked Torrington neck and neck in the first quarter, tying the Trailblazers 19-19 at the quarter break.

“We came out and attacked them really well,” Lundberg said. “We shot nine free throws and were attacking them and going at them.

Then came the second quarter.

Torrington steamrolled the Bulldogs 25-5 in the second to lead 44-24 at intermission, and the lackluster quarter left Lundberg puzzled.

“For some reason we had brain lapses and mental breakdowns like guarding and getting back on defense,” he said. “They hit five threes, and most of them were uncontested. We just kind of disappeared in that quarter.

“That was the difference in the game. They were able to control everything that happened in the second quarter. Nothing really slowed them down. I told the team we’ve got to play with intensity and communication – and the little things we have to have to take the next step.”

Torrington outscored Lovell just 28-24 in the second half to win 72-48, giving the Blazers just a four-point advantage in three of the four quarters.

“Brent (Snyder) kept us in the game,” Lundberg said. “He shot the ball extremely well. He found the soft spot in their zone and would rise up and knock down 15-footers. He scored 17 of his 29 points in the second half. That was good for Brent but not for the team. We’ve got to find more balance.

“Torrington opened our eyes quite a bit to the level of play we need to be at.”

Now 3-2, the Bulldogs are off for the holidays and will resume play Jan. 4-6 at the Big Horn Basin Classic in Thermopolis, opening with the host Bobcats Thursday at 7 p.m. Also in the Thermop bracket are Cody, Shoshoni, Wyoming Indian, Burlington, Buffalo and Wright. The tournament is also played in Worland.