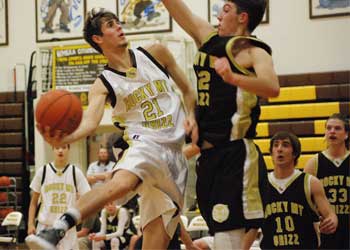 One thing you can say about Michael Simmons, who took a new job in California after coaching the Rocky Mountain Grizzlies for 12 seasons: He certainly didn’t leave the cupboard bare for new coach Pat Winland.

Winland, Simmons’ longtime assistant, takes over a team that lost only one player to graduation – Cole Simmons – and another to the family move, Travis Simmons after going 16-11 and winning the consolation title at the state tournament.

There are 25 players out for the team this season, Winland said: five seniors, three juniors, four sophomores and 13 freshmen.

Asked about the team’s strengths, Winland noted athleticism and dedication.

“A lot of kids put in a lot of time this summer to get where we are right now,” he said. “The seniors have played a lot of basketball together, and Ethan has been included in that group since they were underclassmen. As a team we attended three summer basketball camps, and our players were either there or at another basketball opportunity.

“Our three-point shooting is a strength as well as getting to the basket and using our athleticism. I hope to use that more, plus I think we can get it inside and exploit some mismatches.”

Asked about the team’s challenges as the season begins, Winland said rebounding is a concern for him as well as keeping the ball out of the middle of the floor on defense to prevent penetration by an opponent.

Winland hopes his team will have the ability to run the open court but also work a strong set offense.

“We’ll always try to run and get the easy basket, but if we don’t have a layup or a quick shot opportunity you will see more of a pattern offense in the half court, setting more screens and getting the ball inside. Coach (Jerry) Bellmyer has brought some sets in that I believe could be productive for us.”

“We’re a little bit deeper, so we’ll be able to full-court press more,” he said. “We’ll play a lot of man-to-man and mix in some zone trapping pressure.”

Rocky Mountain’s powerful offense will be set up by senior point guard Tristan Jewell, who tied Dustin Fox of Greybull for second place in the 2A Northwest in assists, dishing off 4.7 per game while also averaging 8.4 points, 4.3 rebounds and 2.3 steals per game.

“Whatever Tristan is working at, he works hard, whether it’s football, basketball or track,” Winland said. “If you see him in practice he’s going all out. He has improved his jump shot.”

Sharpshooter Ethan Price will start at the “two” guard position and can also play the point. Price shot 39 percent from three-point range to lead the conference last season, and he was third in scoring at 13.5 points per game, tops on the Grizzly squad, shooting 54 percent from inside the arc. He also led the 2A Northwest in free throw shooting, hitting 83 percent from the foul line. He averaged 4.6 rebounds per contest.

“Ethan is a great shooter, though as a staff we’d like to see him get to the basket (with a drive) a whole lot more, since he’s an 83 percent free throw shooter,” Winland said.

Starting at guard or wing will be senior Lathan May, a slasher who can also hit from three-point range, Winland said. May averaged 9.4 points per game a year ago, shooting 58 percent from two-point range.

“Lathan is pretty steady and dependable to put up his stat line game in, game out,” Winland said. “He’s a good defender and has long arms.”

Starting at the power forward or “four” position will be senior Colby Davison, who can also play out on the wing or in the post, Winland noted.

“Colby can rebound well. He led us in rebounding last year at 5.6 per game,” the coach added. “He can also step out and hit the job shot.”

Davison averaged 9.2 points per game, shooting 58 percent from inside the arc.

Super leaper Jonathan Allred returns at the post for the Grizzlies after averaging 7.3 points, 5.0 rebounds and 1.3 blocked shots per game.

“He attended all of our team camps and had a great summer,” Winland said. “He’s finishing at the rim a lot better, and we need him to stay on the floor.”

Coming off the bench for the Grizzlies will be senior guard Scott Banks, who Winland said provides energy and a spark to the team when he comes in. He can also hit the three-pointer, the coach added.

“Taylor is crafty in the post. The biggest thing for him will be adjusting to the physicality of the game.”

Freshman guard Jess Wambeke is quick and a good shooter, Winland said, and freshman guard/wing Zach Simmons is a slasher, he added. Freshman Jayden Hocker is a good shooter, the coach said. All four freshmen will see varsity time this season, he said.

Bellmyer is the junior varsity coach, and Justin Moss will coach the freshmen. Jeff Samson will again work as a volunteer coach.

The Grizz will open the season on the road Friday as they travel to Dayton to meet the Tongue River Eagles at 4 (JV) and 7 p.m. before making the trip to Shoshoni for a tournament the following weekend, Dec. 15-16.