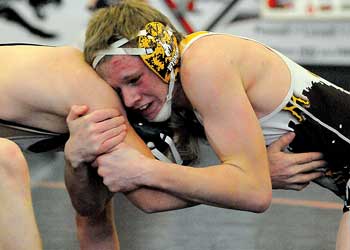 Brothers Travis and Tonka Lytle placed fourth in the tough field of 20 schools from around the state, and senior Wyatt Horrocks also competed on Friday before missing Saturday action due to the ACT test. Four others missed the meet for a variety of reasons from injury to not having enough practices before the opening meet, coach Daniel Robertson said.

Junior Travis Lytle came out strong and went 3-1 Friday in round-robin wrestling, beating Davis and Preator of Powell and Kapptie of Worland, while falling to eventual champion Karst of Powell.

In Saturday’s quarterfinal round Lytle pinned Alcorn of Gillette in 2:41 to advance to the semifinals, where he fell to Elmer of Buffalo on a pin in 1:26.

“He had a good showing, really,” Robertson said. “Elmer is a quality opponent. Travis just got caught trying to throw.”

Facing Preator again for third and fourth, Lytle fell to the Powell wrestler this time, 5-2.

“Overall, Travis did really well,” Robertson said. “I’m not sure he’s ever placed this high in Powell.”

Freshman brother Tonka Lytle also went 3-1 in round robin competition Friday, pinning DeBolt of Lander, falling to Briggs of Riverton on a pin and beating Jesse Briseno of Casper Natrona 11-0 and Orlandi of Sheridan 4-0.

Saturday, Tonka Lytle pinned Charron of Casper Natrona in 1:36 in the quarterfinals, then fell to Yeradi of Wright in the semis 8-0. Wrestling for third and fourth, he was pinned by Fitzgerald of Cody in 4:51.

“He did as well or better than I expected him to do,” Robertson said. “The most important thing is that he didn’t lose to anybody he shouldn’t lose to. That’s the first order of business, to win the matches you’re supposed to win and create opportunities to win the ones you’re not supposed to win.

“We’re getting to that point already (with Tonka). He’s in a great place to start for his career.”

Wrestling for the first time since middle school, Horrocks went 0-3 in round robin competition at 170 pounds Friday, then missed Saturday for the ACT.

“He had a couple of things stacked up against him,” Robertson said. “He was wrestling his first matches in four years, and he was giving up over 10 pounds to start with since he wasn’t allowed to wrestle at 160. He wanted to go varsity and went after it. He ran into a couple of tough kids.

“I have no complaints. He was aggressive and did what he needed to do. He’ll get better.”

The Grizz will attend the Huntley Project duals tournament Saturday in Montana. Action begins at 8:30 a.m.